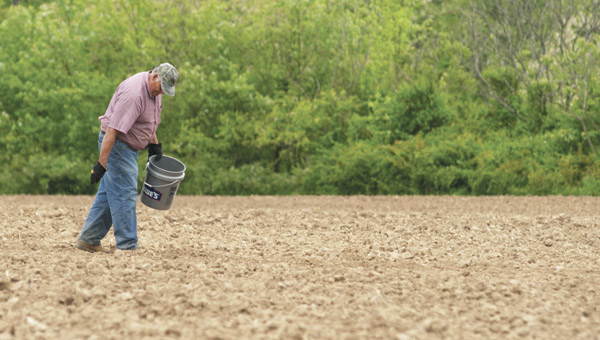 HANGING ROCK — By current Ohio minimum standards, the number of prisoners the Lawrence County Jail should house is 16 prisoners at tops.

Right now the daily jail census ranges from 70 to 72, almost five times those standards. The number of beds there is 52.

Add to that scenario a recent revision in Ohio sentencing guidelines that states first-time fourth and fifth degree felony cases must serve their time at a county jail, not the state penitentiary.

What county officials are banking on as a partial answer to overcrowding lies on five newly tilled acres of burnished soil that stretches down the Ohio River.

They call it the work farm.

Its goal is multiple: To teach life skills to those with little or no workforce experience; reduce the jail population and recidivism and supplement the food budget at the jail.

It was those statistics that were on the table at a special meeting between county and state officials Wednesday. The goal was to get the state to buy into the concept of the work farm with significant dollars. Right now the project has a budget of $65,000 from the county.

The farm is a joint effort among county elected officials, judges and the Ironton-Lawrence County Community Action Organization. That collaboration received accolades from one of the state officials who came down from Columbus for the meeting.

“I commend this group,” Gregory J. Dann, state jail inspector, said. “Jail is the last resort. The most important people in this room are the judges. You are the power brokers. Anything that can free up the hard cells and keep that population down.”

Earlier this month, the first crew started work at the farm, coming from the STAR Community Justice Facility and the county courts. Already 10 to 15 men and women have put in time there working an eight-hour day, then returning home until their next shift.

So far they have planted 200 pounds of potatoes and the plan is for more: Corn, tomatoes, pole beans. All that produce is scheduled to go to the county jail to reduce its cost for food.

It was Dann who said, according to state standards for the required amount of square footage per prisoner, the county jail should only house 16.

“This is one of the oldest jails in Ohio,” Dann said.

As a jail inspector, Dann has seen firsthand how the jail exceeds those standards.

“Where there is a spot on the floor there is a mat,” he said. “This is a serious violation. Can you safely evacuate (in case of a fire)? There is a significant liability that the county could incur.”

Joining Dann was Chris Galli, assistant chief of the bureau of community sanctions, who questioned officials on the scope of the work farm and how its purpose meets the criteria for punishment.

“For me when I sentence someone to community service it is a form of punishment,” Common Pleas Court Judge D. Scott Bowling said. “What we are doing is not working. These felons are going to show up in your system. We can’t pay to house everyone in prison. (The farm) is a form of punishment. (Working there) increases their chances of success. The objective is to keep them out of your hair.”

Galli declined to comment on the concept of the farm.

“We are here to see what it is from the diversion standpoint,” he said.

However, D.R. Gossett, director of the CAO, who played master of ceremonies for the discussion, said he is hopeful the state will respond.

“I am excited about the level of interest and openmindedness to do something outside the box,” Gossett said after the meeting. “There is a good chance they will want to have the program implemented here. That will be between them and the courts. The courts are the driving force. If we meet their criteria, they might be able to bring resources.”