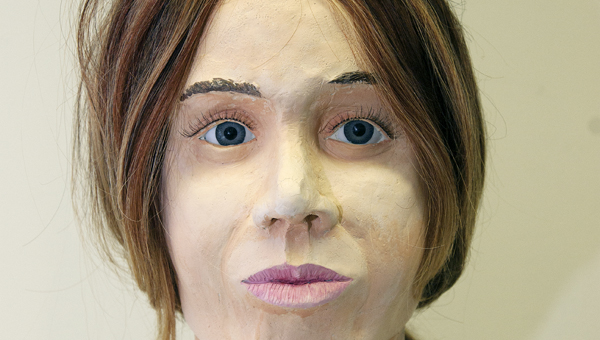 She stares out at the roomful of people through sightless blue eyes. Her porcelain skin glimmers opalescent under the fluorescent lights, but is hard to the touch. Underneath that pale covering that simulates skin lies an actual skull, bone-hard and coppery brown with age.

For a while this clay model of the head of a woman whose identity has stayed a mystery for three decades will stand like a monument to the unknown. But one day the clay will be pulled off and the skull buried again with the remains of the woman called the Belle in the Well.

“This is the actual reconstruction that the Franklin County Coroner’s Office came up with,” Dr. Kurt Hofmann, Lawrence County Coroner, said at a press conference to unveil the model Thursday afternoon. “They begin with pencil erasers and apply the clay to provide the image. It is fairly labor intensive.”

Now authorities are hoping there is someone somewhere who can say who this woman was.

“This is very important to close this case,” Sheriff Jeff Lawless said at the press conference. “There are people who have a loved one missing. You look at (the missing person database) and see all those missing throughout the country and not know where their loved ones are.”

In 1981 the remains of a woman was pulled from a cistern near Dobbstown, her body weighted down with concrete blocks tied to her with panty hose. Around her neck was a rope. An autopsy performed at the time showed that the body could have lain in the cistern as long as 1979. Since no one came forward at the time her body was found authorities surmise she was a transient. The body was found with a bus ticket and a key to a Greyhound Bus Terminal locker.

Two years ago Hofmann put the data from that autopsy into National and Missing Unidentified Persons System to see if there would be a match with any missing women listed. In June the woman’s body was exhumed to take DNA samplings to add to that data. So far about 400 women listed in the database as missing since 1981 have been excluded either from physical evidence or DNA findings.

The most that authorities believe they can say for certain is the body is of a woman, Caucasian, and 5-foot-4. They estimate her age at between 40 to 60 years old. The age is based on the condition of her teeth and amount of dental work in the mouth.

Authorities would like for a relative to come forward or someone whose path crossed the woman’s when she was here.

“With 30 years out this is a pretty cold case,” Hofmann said. “The (DNA) match would have to come from a living relative. Maybe there is someone who has a clear recollection back then who knew the girl.”

Anyone with any information is asked to contact the Lawrence County Sheriff’s Office or the county coroner.

“Someone could recognize this,” Lawless said. “The goal is to relieve some pain.”