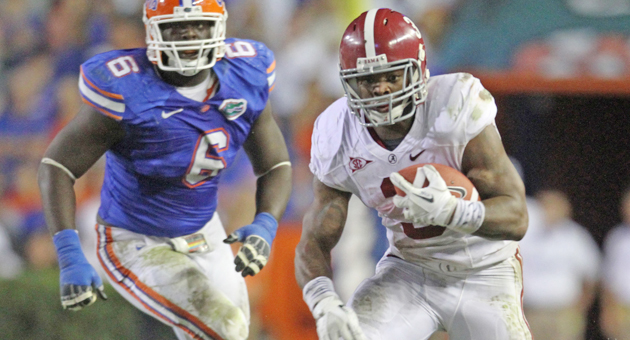 The Cleveland Browns picked Alabama running back Trent Richardson with the No. 3 pick in the NFL draft on Thursday. The Browns also picked Oklahoma State quarterback Brandon Weeden with their second first-round pick. (The Ironton Tribune / MCT Direct Photo)

NEW YORK (AP) — With so much wheeling and dealing, maybe the NFL draft should move to Wall Street.

Minutes before Andrew Luck and Robert Griffin III went 1-2 to the Colts and Redskins on Thursday night, the draft at Radio City Music Hall turned into a deal-a-thon. Through the first seven picks, only Indianapolis kept its original draft spot, and a total of eight trades were made in first round.

The Browns, Jaguars, Cowboys and Eagles all traded up to get players they coveted. The Vikings dropped a spot and still came away with the guy they wanted.

Credit the rookie wage scale for so much buying and selling so early, with general managers making last-minute moves knowing that extravagant salaries for top picks have been replaced by a compensation plan.

Before NFL Commissioner Roger Goodell opened the draft, Minnesota swapped its No. 3 choice for Cleveland’s No. 4 pick, with the Vikings also getting fourth, fifth and seventh rounders. After the Browns went for Alabama running back Trent Richardson, and before the Vikings took tackle Matt Kalil, Florida neighbors Tampa Bay and Jacksonville swung a deal.

Cleveland coach Pat Shurmur said the Browns were convinced a team would leapfrog them to take Richardson, so they pulled the trigger on the 4-for-1 trade.

“Unfortunately we had to make a little trade to secure the pick,” Shurmur said. “We knew as we went through the process that he was our guy and so we did what we had to do to secure it. We had pretty good knowledge that there were teams behind that wanted him as well, so we gave up a couple of picks to make sure we got him. We’re thrilled a bunch about Trent.”

The Jaguars moved up to No. 5 from No. 7 and grabbed wide receiver Justin Blackmon. The Buccaneers, at No. 7, chose Alabama safety Mark Barron, and also acquired the Jaguars’ fourth-round choice.

The St. Louis Rams made a second trade of their first-round pick. The Rams traded away the No. 2 overall pick to the Washington Redskins last month, and were set to select sixth. But Dallas traded its No. 14 choice and a second-rounder to the Rams and grabbed LSU cornerback Morris Claiborne with No. 6.

The Cowboys came into the draft desperate for defensive playmakers, and Claiborne is considered by most as the best cornerback available. Claiborne led LSU with six interceptions last season, won the Jim Thorpe Award as the nation’s top defensive back, and averaged 25 yards per kickoff return.

Tampa Bay general manager Mark Dominik said he wanted Barron all along at No. 5, but felt he could deal down and still get the All-American who was a vital cog in the nation’s best defense last season.

“I was a little nervous, though, when the Cowboys moved up to No. 6,” he said.

Deals weren’t done yet. Philadelphia, looking to strengthen its defensive line, moved up three spots to No. 12 by making a trade with Seattle and selecting Mississippi State defensive tackle Fletcher Cox. Even the New England Patriots got in on the action with two first-round deals.

The Patriots traded their No. 27 pick and third-rounder for the Bengals’ No. 21 spot and took Syracuse defensive end Chandler Jones. They then dealt the No. 31 choice and a fourth-rounder to Denver and went for Alabama linebacker Dont’a Hightower.

The Vikings added another first-round choice when they acquired the No. 29 overall choice from Baltimore. The Ravens received the Vikings’ second and fourth-round picks. Minnesota used its pick to grab Notre Dame safety Harrison Smith.

In addition to Minnesota trading back into the first round, so did Tampa Bay. The Bucs made a deal for Denver’s 31st pick — acquired earlier in the night from New England — and selected Boise State running back Doug Martin.