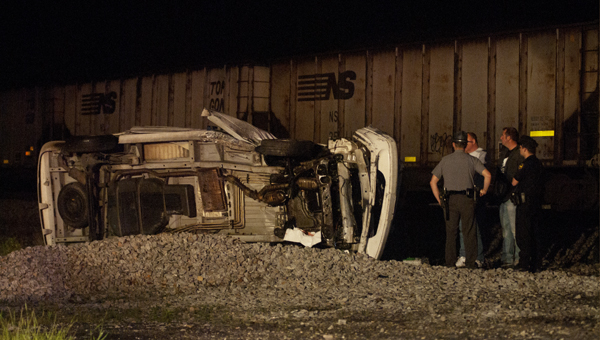 Local authorities are seen next to an overturned van in Coal Grove, by the old Carlyle Tile Plant, late Sunday evening. The van was hit by a Norfolk Southern train.

An Ashland, Ky., woman is in the Lawrence County Jail for railroad vandalism and criminal trespass after the van she was driving was hit by a train.

Sacha N. Dees, 34, of Ashland, drove her van to the railroad crossing at the Coal Grove boat ramp, according to Coal Grove Police Chief Eric Spurlock.

She exited with two dogs and went up the tracks toward the Ashland Bridge and sat down on the middle of the tracks, holding the dogs.

Coal Grove Police, assisted by Ironton Police, took the woman into custody. According to Spurlock, at that time she did not cooperate with the police and started fighting them.

The van was locked and running, and the eastbound train hit the vehicle, coming within a few hundred feet of hitting the woman before it stopped.

Dees is also charged with resisting arrest, cruelty to animals and inciting a panic.

She was lodged in the Lawrence County Jail and will be evaluated by Shawnee Mental Health Center. The dogs are at the county dog pound.

She will be arraigned in Ironton Municipal Court at 1 p.m. today.

(Editor’s note: Based on information provided by law enforcement, it was initially reported that the train came within a few feet of hitting Dees. However, statements by CSX employees indicate the train was approximately 300 feet away before it stopped. We regret the error and are happy to correct it.)

Sharon Mays, left, has her blood pressure checked by Diana Williams, with Our Lady of Bellefonte Hospital, during a health... read more