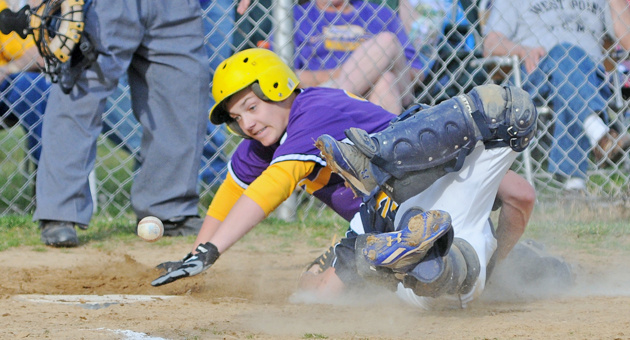 The St. Joseph Flyers started out with a slow walk that turned into a sprint.

Leading just 4-2 in the middle of the fifth inning, the Flyers scored five runs in the bottom of the inning and rolled to a 10-4 win over the Hannan Wildcats on Monday.

“We started a little slow, but we came on strong at the end and started to hit,” said Flyers’ coach Brent Wirzfeld.

Grant Geswein went 4.2 innings to get the win. He gave up six hits, two runs but only one earned and three walks.

“That was Grant’s first start and he was nervous. I just told him to throw strikes and he did and we made the plays behind him,” said Wirzfeld.

The Flyers had 12 hits with Cole Willis going 3-4 with a double and three runs batted in. Jacob Clark and Geswein were 2-2, and Hunter Pemberton and Joseph Payton 2-4.

St. Joseph (5-3) took a 1-0 lead in the first when Pemberton singled, stole second and third bases and score on Payton’s sacrifice fly.

Geswein and Clark were hit by pitches and Eli Lewis hit into a fielder’s choice for a run in the second inning and Pemberton reached on an error as the lead went to 3-0.

Willis singled, Bryan Adkins was hit by a pitch and Geswein and Clark singled for a run in the third to make it 4-0.

Hannan got two runs in the top of the fifth but the Flyers answered with five in the bottom of the inning.

Geswein singled, Chris Lewis walked and Clark, Pemberton and Payton all singled for two runs. Willis then doubled off the fence to clear the bases and it was 9-2.

The Flyers got their run in the sixth on walks to Geswein and Chris Lewis and a base hit by Eli Lutz.

The Associated Press   CLEVELAND — Colt McCoy returned to work with the Cleveland Browns not knowing how much longer... read more