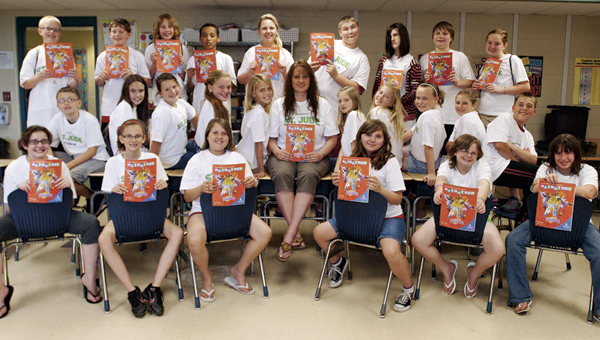 COAL GROVE — As far as they are concerned, extra recess time and prizes were just the icing on the cake for fifth graders who participated in a Math-A-Thon recently.

The real reason was much more altruistic.

Donna Wagner, math teacher, said 26 students volunteered to find sponsors, collect pledges and complete Math-A-Thon workbooks provided by the hospital. Students also watched a DVD about St. Jude’s and the children who are treated for illness there each year.

“It went very well,” Wagner said. “We reached our goal and exceeded it.”

Top seller for this year was Abby Camp, who raised more than $200.

Camp said math is her favorite subject, but volunteered because of a local girl battling cancer, Josie Butcher.

Josie was only 5 years old and had just started kindergarten in 2010 at Dawson-Bryant Elementary when her first year in school was interrupted by an unexpected diagnosis on of a very rare form of cancer, rhabdomyosarcoma.

Camp also said learning about how many children at St. Jude’s are fighting cancer made her want to help.

The thought of helping children who have cancer because it could just as easily be any of the 26 fifth graders was a motivator for many of the other students as well.

“One day it might be one of us in the hospital,” said Desiree Williams, who raised more than $100.

“I wanted to volunteer because I felt real sorry for the kids who had cancer,” J.J. Hackworth said. “I thought it would be real nice to donate a lot of money. You don’t want them to feel bad.”

Hackworth also raised more than $100 for the Math-A-Thon and said he would like to thank all the teachers and family members who sponsored him.

Top sellers Camp, Williams, Hackworth and Matt Coyer won a free lunch with their teacher, in addition to a t-shirt, book bag and game set.

All students who participated also got a T-shirt.

“It’s a joy to be able to do this,” Wagner said. “It’s a good way to encourage the kids to do math.”