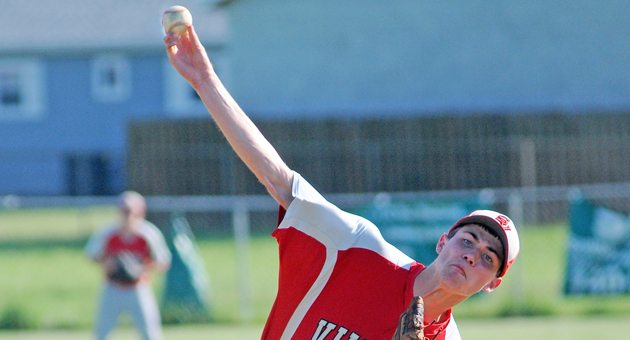 FRANKLIN FURNACE — The Symmes Valley Vikings got what they needed.

The Vikings needed a win to keep pace with Portsmouth Notre Dame in the Southern Ohio Conference race and they did just that with a 7-4 win over the Green Bobcats on Wednesday.

“We hit the ball okay and Mitchell threw pretty well, but we still made some mistakes,” said Vikings’ coach Chad Renfroe. “Still, it wasn’t a bad game. We beat a good team.”

Mitchell Corn picked up the win as he gave up nine hits, struck out three, walked five and only three runs were earned.

The Vikings went up 1-0 in the third when Alec Herrell walked, Scott Dial put down a sacrifice and Cody Myers singled.

Green (17-7, 11-3) took a 2-1 lead in the bottom of the inning when Cody Bruce walked, Steve Ratcliff and Adam Riffitt singled for a run and an error scored Ratcliff.

The Vikings scored four runs in the fourth to go up for good at 5-2.

Michael Williams reached on an error, Jordan Fulford walked and Herrell had an RBI single. Dial and Myers were safe on errors for a run and Tanner Mays singled home two more.

Dylan Pelletier singled, Fulford reached on an error and Herrell singled for a run in the fifth and Mays got the final run in the sixth when he singled, stole second and third and scored on an error.

Green mounted a rally in the seventh but only managed two runs.

Rob Applegate walked, Bruce singled and Ratcliff hit into a fielder’s choice for a run. Riffitt singled to drive in the final run.