Trainer hoping for a “Union Rags” to riches win at Derby 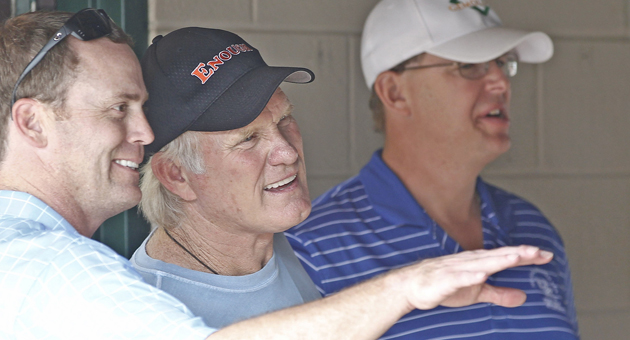 LOUISVILLE, Ky. — The life-sized statue sits at the front gate of Churchill Downs, a magnificent bronzed Barbaro in full stride, all four hooves off the ground and heading toward his greatest victory.

Muscular and athletic, its presence provokes quiet reflection of the 2006 Kentucky Derby winner at the peak of his power and of his death, eight months later, following a horrific injury.

Trainer Michael Matz is hoping another 3-year-old colt, Union Rags, can fill the hole in his barn and in his soul.

He sees the same promising signs from Union Rags, who is using the same stall as Barbaro and is the early second choice for Saturday’s 138th Derby.

“They’re both big, good-looking, fast and athletic. Union Rags still has to live up to what Barbaro did,” Matz said.

Matz and owners Roy and Gretchen Jackson all rode a roller coaster of emotion during Barbaro’s eight-month fight that had the public rooting for his survival from the hoof infection that developed after he broke his leg in the opening strides of the Preakness two weeks after the Derby. Just when the colt seemed on the mend, another surgery would be needed and their hopes would sag again.

Late in 2006, the trio won the $2 million Breeders’ Cup Ladies’ Classic with Round Pond, but their good luck ran out two months later when Barbaro was euthanized.

Matz stoically plowed ahead, with the Jacksons supplying him more horses to train, including Barbaro’s baby brothers Nicanor and Lentenor.

Things abruptly changed in July, with the couple firing Matz after more than 10 years working together. The Jacksons told him it was a business decision, leaving Matz mystified and convinced he had said or done something to make them lose confidence in him.

Matz has said he will be forever grateful to the couple for giving him a Derby winner, although they no longer keep in touch.

He has never been one to let tragedy or setbacks slow him down. In 1989, he and his future wife, D.D. Alexander, were passengers on a United Airlines flight that crash-landed in Sioux City, Iowa, killing 111 people on board. The couple survived, and Matz heroically plucked four children — three siblings and an 11-month-old baby — from the wreckage.

The older kids reunited with Matz and his wife at the 2006 Derby to watch Barbaro become the sixth undefeated horse to win. The good feelings were dashed two weeks later with Barbaro’s stunning breakdown that had fans crying in the stands at the Preakness.

“It probably changed us all in a little way,” said Peter Brette, Matz’s assistant. “One minute you think you got probably the best horse in the world, and then the next minute, he’s broken. You spend six months sort of hoping he can survive, and that was a bit of a shock really.”

If Matz grieved, he did it privately, in keeping with his cool demeanor around the racetrack.

“If that had happened to some of us, it probably would have been a little hard, but he handles it well,” Hall of Fame trainer D. Wayne Lukas said. “He’s not going to get too high or too low, which is pretty good in our profession if you can do that. When you’re secure in what you’re doing and your abilities, you handle all that adversity.”

Matz was unknown as a trainer outside the Mid-Atlantic area before Barbaro romped to a 6 1-2-length win in the Derby. A three-time Olympic equestrian, he carried the U.S. flag in the closing ceremony at the 1996 Atlanta Games. He turned to training thoroughbreds full time after failing to make the 2000 Olympics.

Now Matz has moved on again, training Union Rags for Phyllis Wyeth, the 71-year-old former steeplechase rider and aide to President John F. Kennedy. She is married to Jamie Wyeth, the famed painter and son of artist Andrew Wyeth.

“I guess when he moved on from the Jacksons and Barbaro, all of a sudden Union Rags won his first start,” Jamie Wyeth said. “It’s kind of interesting how that seems to be in the air. He just moves right on to another thing. He’s such a wonderful person.”

Jamie Wyeth described Matz as “a perfect fit for us.”

Matz is on a mission to win a second Derby with his best horse since Barbaro, having returned to Churchill Downs in 2008 with low-profile Visionaire, who finished 12th.

Union Rags is the early 9-2 second choice for Saturday’s race.

“Barbaro was undefeated. This horse is a length and a half from being undefeated,” Matz said, referring to Union Rags’ third-place finish in the Florida Derby in March.

He plays down his influence on the colt. “Anybody could train him,” he said. “He does what he’s supposed to do. He’s got manners, ability, and I think they call that class.”

Matz wants to win this one for Phyllis Wyeth, who injured her neck in a 1962 car accident and became wheelchair-bound in 2001 as a result of its degenerative effects. Wyeth grew up in a racing family but didn’t experience the thrill of a major stakes victory until last year when Union Rags won the Champagne at Saratoga.

“She’s a real trouper, and I think she’d enjoy it like anybody else would,” Matz said. “She told me the other day she got on the plane to come down here and she cried.”

Wyeth bred Union Rags in 2009 near Philadelphia at Chadds Ford Stable, a short drive from the Jacksons’ farm. After failing to find anyone to buy a half-share of the horse, she decided to sell Union Rags for $145,000 to Mike Ivarone of IEAH Stables, owner of 2008 Derby and Preakness winner Big Brown. Wyeth later got a bad case of seller’s remorse.

“It almost sounds like a bad movie,” Jamie Wyeth said. “Phyllis is a different sort of owner in that she’s a small owner, doesn’t have a lot of horses, but each horse means very much to her, in particular this one.”

Standing under blue skies with a slight breeze, six individuals led a group of more than 20 people in... read more