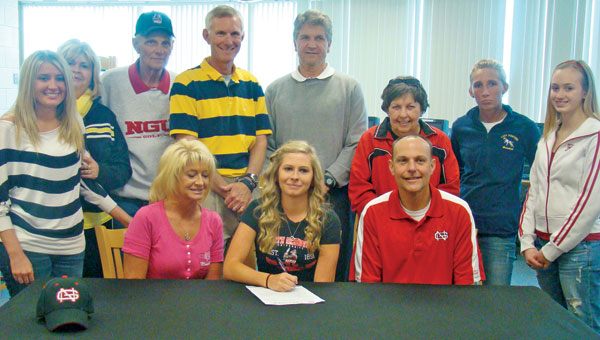 SOUTH POINT — Callie Taylor is going from the green grass of her front yard to the greens of a South Carolina golf course.

The South Point Lady Pointers’ senior golfer who began playing in the front yard has signed a letter-of-intent to play for North Greenville University in Tigerville, S.C.

“I’ve been playing since I was four or five,” said Taylor. “My brother (Zac) and grandpa (Gary Taylor) got me into (golf). They would be in the yard hitting golf balls and I wanted to do what they were doing.”

She was a All-Ohio Valley Conference as a junior as she placed second in a field of 60 male golfers.

The number two player on the boys’ team as a freshman and sophomore, she was the number one player as a junior and senior.

In the girls’ postseason tournaments, Taylor finished seventh in the district in 2009 in a field of 70 golfers.

Although Taylor has enjoyed a lot of success at the high school level, she knows the stakes will be higher at the collegiate level.

Taylor actually learned about North Greenville when the school’s president spoke at a graduation ceremony. She said he convinced her to go to the Baptist-based school.

The Christian atmosphere is very appealing to Taylor who said she would like to give back to the game of golf by working with and teaching youths about the game and how to develop their golf skills.

“The game of golf has taugh her about good sportsmanship and the importance of honesty and integrity to the game, which she feels are characteristics that are important to success if life,” said South Point principal John Maynard.

“She is very compassionate, considerate and kind to others.”

The Lady Crusaders play in Conference Carolinas and placed seventh among 10 teams in their first-ever conference tournament participation. The team roster consisted of three juniors and three sophomores.

“The coach said the team will be improving. I’m excited to be a part of that,” said Taylor.

Taylor — who maintains a 3.34 grade point average — plans to major in business administration. She will receive athletic and academic scholarship money to attend North Greenville.

ACTC graduation is set for May 12

ASHLAND, Ky. — Ashland Community and Technical College will recognize a record 554 students at the graduation ceremony at 10... read more