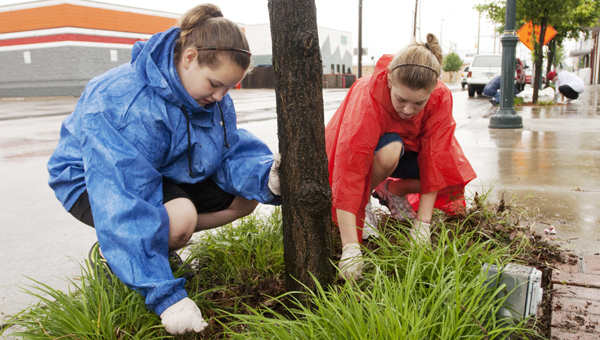 Volunteers pick up debris and pulls weeds in the streets of Ironton Saturday.

Rain slickers were as much the uniform Saturday morning as the T-shirts declaring why so many had come out to brave the soggy weather.

This was the fifth year for the Great American Cleanup, the logo emblazoned on shirts worn by volunteers throughout the county who spent the morning weeding, planting flowers, pruning and picking up trash.

Before the 9 a.m. kickoff Palmer and Ironton Mayor Rich Blankenship debated on whether to cancel the event.

“But we have had rain before,” Palmer said. “And I’m pleased with those who have turned out.”

Since its inception, students at St. Joseph High School have participated under the direction of religion teacher Maria Whaley.

“It’s an outreach mission of the church,” Whaley said. “They are called to care for God’s creatures and this is one way the school community can do that.”

Alexander Ward, Judge Williams and Logan Carrico, all eighth graders at St. Joseph, teamed up to weed and pick up trash along Third Street.

“When you are making a bigger change, it always makes you feel good,” Logan said.

“We have a dirty city and it should be clean,” Judge said.

Ironton in Bloom volunteers were busy planting bag after bag of day lilies around the new Depot Square. The flowers were donated by a gardener in the city.

“We appreciate the community caring so much about beautification,” Carol Allen, IIB president, said.

Eighteen from the community service work program of the Ironton Municipal Court cleaned up the exits along U.S. 52.

“We do the exits because this is crucial,” Judge O. Clark Collins said. “They are like the community’s front door.”

Collins said he looks at events like this as a way to change behaviors.

“We have to educate the community to take more pride,” Collins said. “We want to educate people not to litter.”

That so many students express such interest in the event is gratifying, Blankenship said.

“They are our future leaders,” he said. “They are taking pride in our community.”

Benefit golf scramble set for May 26

A Lawrence County mission organization is planning a golf scramble to help pay for medicines that will be taken on... read more