Calipari gets raise for winning title 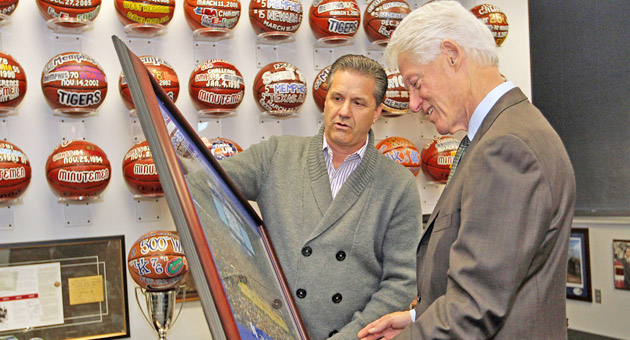 Kentucky coach John Calipari is getting a raise after the Wildcats won the NCAA basketball title.

The school said Friday it awarded an 8.3 percent increase annually in his guaranteed compensation over the remaining seven years of his deal now worth $36.5 million. Three assistants also received multiyear extensions.

“It’s rare, in this day and age, to be able to keep a staff together that has helped produce a national championship and back-to-back Final Four runs,” Kentucky athletic director Mitch Barnhart said. “We want to show them how appreciative we are of their hard work and dedication, and how much they mean to this program.”

Calipari will receive $5.2 million annually from endorsements, base salary and retention bonuses for each of the next six years. The deal increases to $5.3 million in 2018-19. He can also earn up to $850,000 a year in performance bonuses.

Assistant coaches Orlando Antigua (two-year extension), Kenny Payne (three years) and John Robic (two years) will have base salaries ranging from $250,000 to $350,000 before incentives. Their contracts have a combined guaranteed value of $2.15 million.

Calipari took over the Wildcats in 2009 and immediately elevated the program back to elite status.

Kentucky went to the regional finals in Calipari’s first year, the Final Four in his second and won the first title of his career in April after a 67-59 victory over Kansas to finish 38-2. It was the school’s eighth championship in school history and first since 1998.

His entire starting lineup — freshmen Anthony Davis, Michael Kidd-Gilchrist and Marquis Teague and sophomores Terrence Jones and Doron Lamb — has declared for this June’s NBA draft. Davis is expected to be the No. 1 pick. Senior Darius Miller also is expected to be drafted.

Nine Wildcats have been selected in the draft over the past two seasons, but Calipari has managed to reload each year by promoting his “players’ first” approach to the program. His latest recruiting class is expected to be ranked No. 1 for the fourth straight year when the signing period ends May 16 with the additions of Nerlens Noel, Archie Goodwin, Alex Poythress and Willie Cauley, as the Wildcats work to replace seven players on their roster.

The Wildcats head into next season with the nation’s longest home winning streak at 52 straight. According to the school, all four of his seniors and a junior have earned degrees since he arrived, with two more on track to graduate this year.

Calipari is one of two coaches to take three different schools to the Final Four, but runs in 1996 with Massachusetts and 2008 with Memphis were later vacated by the NCAA due to rules violations, though he was never implicated. Calipari, who also spent 2 1/2 seasons in the NBA, is 547-154 in 20 years as a college head coach.