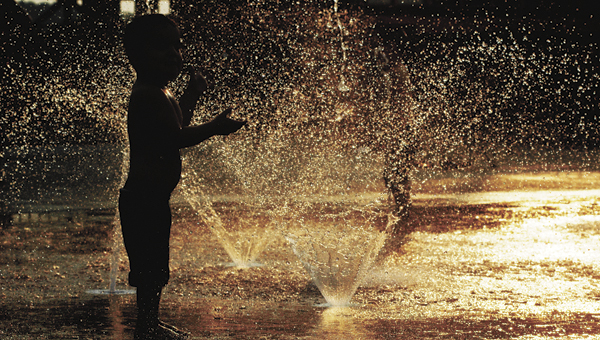 Six years ago city and Ironton Lawrence County Community Action Organization officials stood in front of the public and announced plans for a transit center for the county’s fledgling bus system and a farmer’s market to help revitalize Ironton’s downtown.

On May 12, officials will stand in front of the finished product and celebrate the success that has come from those years of hard work. A ceremony is planned for 11 a.m. that day to dedicate the Transit Center and Depot Square and to unveil the new name for the adjacent sprayground.

It will be known as Friends Park. This new name is a nod to the Friends of Ironton, the organization that led the way in developing the child-friendly water park on Second Street across from the Transit Center.

Although the Transit Center and an adjoining café, operated by Tri-State Industries, have already opened to the public, CAO Assistant Director Ralph Kline explained, “We just never had a formal dedication of this all coming together.”

Ironton Mayor Rich Blankenship said he is pleased with the completion of these projects and thinks they are wonderful additions to the downtown.

“I know some of these projects have taken some time, but good things come to those who wait. We had to work through a lot of bureaucracy but at the end of the day we saw these plans come to fruition.”

Also, city and CAO leaders will officially honor the numerous volunteers who have made so many community events and programs successful. The first-ever “Community Family Day” will follow the dedication and unveiling and continue until 2 p.m.

“We would like to make this an annual event,” Kline said. He pointed out this ceremony and Community Family Day will be an unofficial kickoff to a busy summer event season in Ironton. The weekend of May 19 is the Gus Macker event; the following weekend is the Ironton-Lawrence County Memorial Day Parade. Other fairs and festivals include Rally on The River in August.