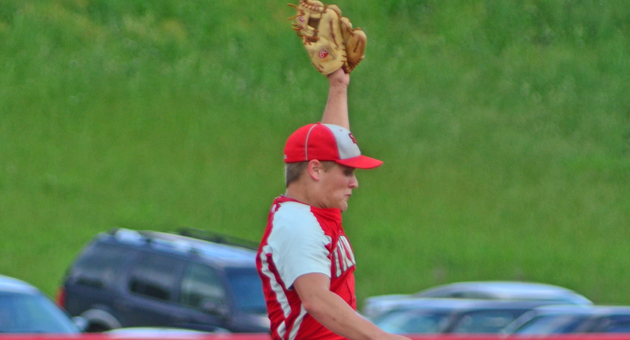 AID — Buckle your safety belts. The Symmes Valley Vikings are in the driver’s seat.

The Vikings used a two-run homer by Tanner Mays to edge the Portmsouth Notre Dame Titans 5-4 on Monday to take a one-game lead in the Southern Ohio Conference race.

“We control our own destiny now,” said Vikings’ coach Chad Renfroe. “The kids played so hard and Mitchell threw a heck of a game. He’s really grown up a lot this year.”

Mitchell Corn got the win as he struck out nine, walked two, hit two and gave up 10 hits.

Tyler Noel took the loss as he struck out six, walked six, hit two batters, gave up just four hits and only two runs were earned.

The Vikings took a 3-0 lead in the first inning.

Alec Herrell reached on an error, Scott Dial put down a sacrifice, Mays was safe on an error as a run score, Garrett Foster hit into a fielder’s choice and Corn singled home two runs.

The Titans got within 3-2 in the top of the fifth on a two-run singled by Adam Cooper after singles by Noel and Brad Pierron and an outfield error.

But the Vikings answered in the bottom of the inning on a walk to Cody Myers and then Mays slammer a two-run homer with no outs.

Notre Dame rallied for two runs in the sixth to make it 5-4.

But Corn shut down the Titans in the seventh to preserve the win.

By JIM WALKER Tribune Sports Editor   CHESAPEAKE — Down but not out. Trailing late in their fourth straight game,... read more