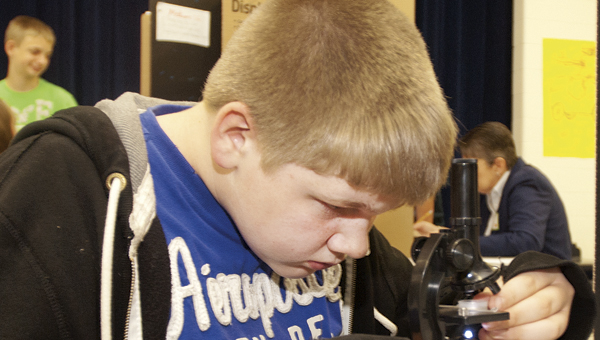 Seth Ward prepares a sample of water bears to be viewed as part of his science fair project at Burlington Elementary School Tuesday.

BURLINGTON — From the study of wildflowers in the Tri-State to building robots, more than 70 fifth grade students at Burlington Elementary School displayed their newfound knowledge at the science fair Tuesday.

Each student gave a presentation as a judge graded his or her project.

Fifth grade science teacher Jeff Heinl said he was very impressed with the overall quality of the projects. Most of the students took a general interest in their projects.

Heinl said the science fair was part of the ultimate goal. “The most important thing is to get kids interested in science,” he said.

Abby Kincaid’s project was titled “Medicinal Wildflowers of the Tri-State.” She started her project in spring 2011 to study wildflowers in the different seasons.

“I’m very interested in wildflowers and how folks in the past used them to make medicine,” Abby, 11, said.

Abby created a 56-page book to use during her presentation, which included 19 citations.

“I’m very proud of my project,” Kincaid said. “I’m happy with the way it turned out.”

Sara Allen, a fellow student, chose to look at brain functions. But after a discussion with her mother, she decided to concentrate on a specific disease.

“I studied how environmental hazards can cause dementia,” Sara said. “I think it went well. I’m happy with the results.”

Sara said she would like to become a doctor and research the disease more.

Mackenzie Lowry, 11, demonstrated his project, which was the study of robots. He built two robots, one drew circles and the other moved around, collecting small balls.

The science fair was broken up into different categories including health science, physics, astronomy/space, earth/environmental science, zoology, chemistry, consumer science, behavior science, general science, human biology, botany, weather and energy. Each category is awarded a first, second and third place as well as honorable mention. Every student that places receives a ribbon. After each category is judged, there will be an overall winner. The grand prize is a trophy.

Every student who participated in the science fair received a ribbon.