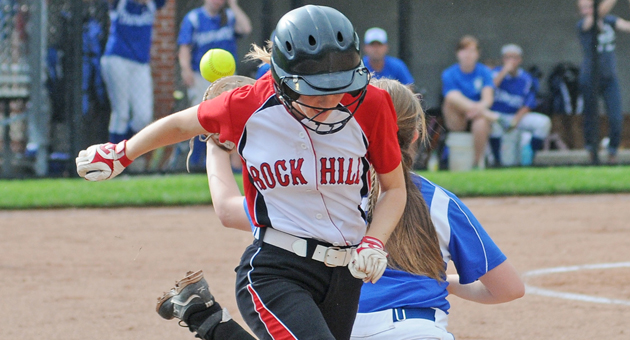 Rock Hill’s BreeAnna Depriest beats out a bunt single during a 10-0 win over Southeastern on Tuesday in the Div. III sectional tournament. (The Ironton Tribune / Kent Sanborn of Southern Ohio Sports Photos)

PEDRO — All season pitching and defense have been the key for the Rock Hill Redwomen. Those factors were even bigger as the postseason began.

Sami Nixon pitched a two-hitter and the defense pulled off a triple play as Rock Hill blanked the Southeastern Lady Panthers 10-0 in five innings on Tuesday in the Division III sectional tournament.

Nixon struck out eight and walked just one to get the win.

“Our hitting was a little rusty, but Sami pitched well and our defense was pretty good,” said Rock Hill coach Mary Jane Harper.

The defense had just one error and it was highlighted by a third inning triple play.

With Southeastern runners at first and second, the batter attempted to bunt the ball and Rock Hill first baseman Morgan Damron made a diving catch for the first out.

“It was a really neat play,” said Harper.

Rock Hill got three runs in the first inning on one hit.

Damron reached on an error, Depriest was hit by a pitch, they moved up on a wild pitch and Chelsea Harper doubled home the two runners. Harper then scored on two wild pitches.

A run scored in the second when Nixon was hit by a pitch, courtesy runner Brooke Kingery moved up on an error and scored when Brooke Eastham was safe on an error.

The lead went to 5-0 in the third inning.

Brooke Hanshaw was safe on an error, Martin put down a sacrifice bunt and Kaelynn Ellis had an RBI double.

Rock Hill ended the game early with five runs in the bottom of the fifth.

Nixon and Lindy Simpson walked, Damron was hit by a pitch, Depriest had a two-run single and Harper singled in the final run.

The Associated Press   MILWAUKEE — Homer Bailey’s day went badly from the beginning. With two outs in the first... read more