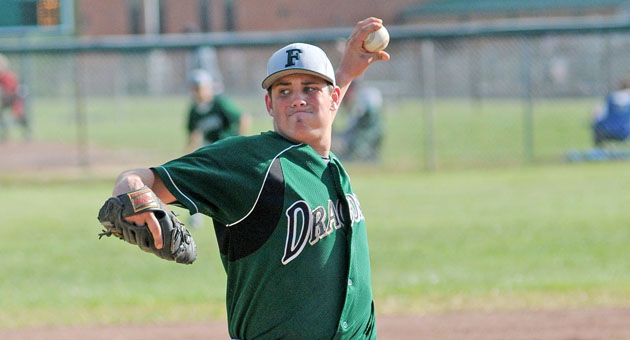 Fairland pitcher Alex Thackston struck out 15 batters but the Dragons had five errors in a 6-4 eight-inning loss to Unioto on Thursday in the Division II sectional tournament. (The Ironton Tribune / Kent Sanborn of Southern Ohio Sports Photos)

PROCTORVILLE — There were a couple of things missing from Fairland’s game, and as a result they missed out on a sectional title.

The Dragons were guilty of five errors and they left 13 runners on base in a 6-4 eight-inning loss to the Unioto Shermans on Thursday in the Division II sectional finals.

“Our defense hurt us and our lack of clutch hitting,” said Fairland coach Bryan Ward. “Thackston threw a good game. We just gave it away.”

Alex Thackston turned in a complete game for Fairland and racked up 15 strikeouts. He allowed two walks, one hit batsman and only one run was earned.

Fairland took a 1-0 lead in the first inning.

Eric Riley walked but Corey Barker hit into a force play. Barker moved up on a passed ball and Thackston was intentionally walked. Kyle Raines then delivered an RBI single.

However, the Dragons left five runners on in the first two innings and Unioto tied the game in the second.

The Shermans took a 2-1 lead in the fourth on a double by Spradlin and a single by Eisel.

Unioto’s lead went to 4-1 in the top of the sixth when Spradlin singled, Eisel reached on an error, both moved up on a passed ball and scored on a ground out.

The Dragons rallied to tie the game with three runs in the bottom of the inning.

Evan Russell walked, Blaine Fuller reached on an error and Riley walked. Barker then cleared the bases with a double and it was 4-4.

Fairland then loaded the bases again but could not get any runners home.

The Shermans got two runs in the eighth to clinch the win.

Minney singled and stole second to start the rally but Thackston struck out the next two batters. Eisel was hit by a pitch and Caleb Leslie reached on a throwing error as both runners scored.

Raines was 2-4 and Barker 1-5 with three runs batted in as both teams got six hits.

OVC track titles up for grabs