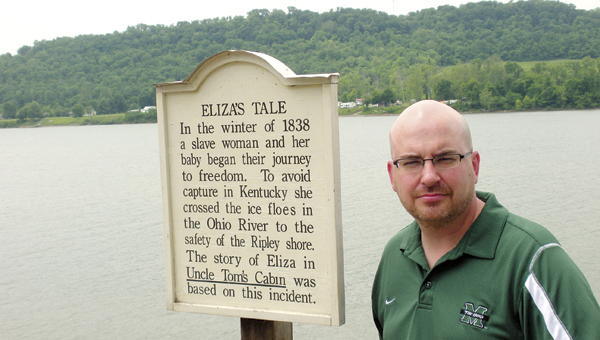 Chris Saunders stands in Ripley, Ohio, the former home of John Rankin, who was instrumental in inspiring the book “Uncle Tom’s Cabin.” He died in Ironton in what is now the Lawrence County Museum on Sixth and Adams.

BURLINGTON — Looking to dig into some of the history of Lawrence County?

The series focuses on the lineage of celebrities and other well-known people, tracing their familial ties back to places such as Burlington.

On Sunday at 8 pm, Saunders’ work behind the scenes will help trace those ties locally.

In the segment of the 10-part series in which Saunders assisted, the topics of discussion are former local basketball phenom, O.J. Mayo, and nine time Grammy Award winner John Legend.

The roots of both celebrities are dug deep into the local soil.

It was this research that led officials from PBS to Saunders.

“I had friends in an online history group and word spread,” he explained. “One day last summer, I got an email from PBS asking me to call them in New York.”

The network asked specifically about his research pertaining to a family named Polley, ancestors of John Legend and former slaves in Pike County, Ky. whom he had studied for the past few years.

A short time later, a PBS production crew was in Lawrence County.

Since then, again utilizing his research, Saunders was able to assist in the closing of the longest running slave case in the United States.

The case, which originally went to trial in 1851, was heard in April by the Wayne County, WV, Circuit Court. It centered around the Polley family, whose children had been kidnapped back into slavery. Actual depositions from the original case were presented in the trial.

Judge Darrell Pratt ruled that the Polley children were free and should have been since 1849.

“Honestly, I never imagined when I started researching (local history) that I would ever be involved in something like this,” Saunders said.

He also never imagined that his work would be integral to the formation of such a high-profile documentary.

Saunders also conducts four seperate guided tours in Burlington, where he brings to life the many principal characters involved in the local Underground Railroad, as well as other interesting historical figures from eras past.

For information about a tour, Saunders can be contacted at (304) 412-4852 or via email at mr.cmsaunders@gmail.com.

Police department layoffs and city finances were the bulk of the conversation when Ironton City Council met Thursday... read more