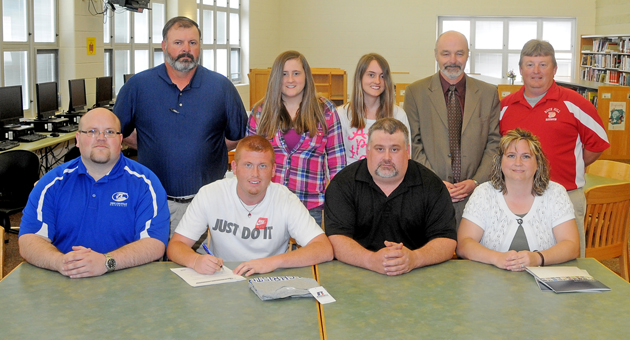 The Rock Hill Redmen senior third baseman had always hoped he could play baseball beyond the high school level. After signing a letter-of-intent to play for the Ohio Christian University Trailblazers, Jenkins no longer is just hoping.

“I had my dream of playing at the next level and now I get that chance. Hopefully I can do well and go higher,” said Jenkins.

Jenkins — who helped Rock Hill win a second straight Ohio Valley Conference championship this season — hopes to play third base at OCU, but he said the position he plays is negotiable.

“I’m going to try third base, but if they need me to play anywhere else I’m up to it,” said Jenkins who has just two errors in 23 games at the hot corner. “No matter where I play, it’s going to take hard work and practice every day.”

If it is going to take hard work and practice, Rock Hill coach Barry Litteral said Jenkins should do well.

“He can play there. He has good bat speed and he fields well at third base. He has pretty good foot speed as far as agility at third base,” said Litteral.

“Matt has a good work ethic on and off the field. It’s a family atmosphere. He’ll fit into their system real well.”

“It’s closer and it is nice and peaceful. I knew it was the place for me,” said Jenkins. “I like the community atmosphere and family feel that the OCU campus has.”

OCU recruiting coordinator Jamey Batten said Jenkins reached out to the school and the coaching staff was glad that he did.

“(Jenkins) went on our website and inquired about coming to school here. We followed up on it, he did a workout for our coaches and the coaches liked what they saw. They were impressed by his ability,” said Batten.