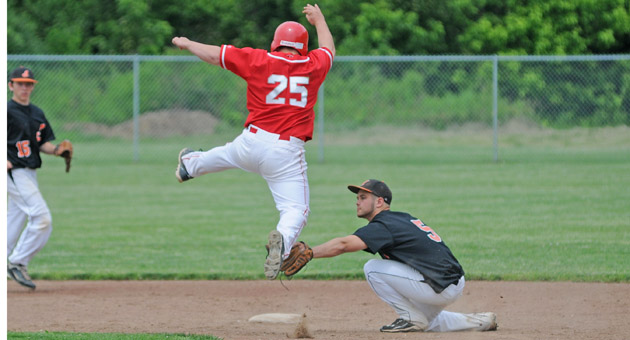 Evidently one bad apple can spoil the whole bunch.

Two errors helped fuel a five-run second inning as the Minford Falcons got past the Ironton Fighting Tigers 5-2 on Saturday in the Division III sectional finals.

Steve Easterling took the loss despite only one of the runs being earned. Easterling (7-3) struck out nine, walked two and gave up eight hits.

“That’s been our problem all year. We have breakdowns defensively and it comes back to haunt us,” said Ironton coach Tobey Schreck.

“Steve threw a good game. We made some mistakes and let it affect us mentally instead of picking ourselves up. Other than the second inning, we played alright.”

Eli Duduit ignited the five-run second with a leadoff double. A pickoff throw went into centerfield and Duduit dove back into the bag. However, the ball got past the centerfielder and Duduit got up and ran home.

Jared McCray and Quinton Smith followed with hits and then another mistake hit. Austin Oesch tried a sacrifice bunt and Easterling fielded the ball and threw to third base. But the third baseman was off the bag and the bases were loaded.

A passed ball scored the next run and then Levi Jenkins doubled for a run. Easterling struck out the next batter but Dylan Shockley singled for two more runs.

Ironton scored its two runs in the fourth inning.

Sean Lawless singled and moved to second base on a hit by Brandon Leach. Nick Culbertson then drove an 0-2 pitch to left-center for a run and, when the ball went under the leftfielder’s glove, Leach came on to score.

Ironton had only two other base-runners the rest of the game, a single by Lawless to start the sixth and Maurice Phillips reached on a two-out error in the seventh.

Lawless was 2-for-3 as Ironton had six hits off Tyler Sanford. The Minford pitcher struck out seven and did not walk a batter.

Jenkins was 3-4 and Duduit 2-4 as the Falcons got eight hits.