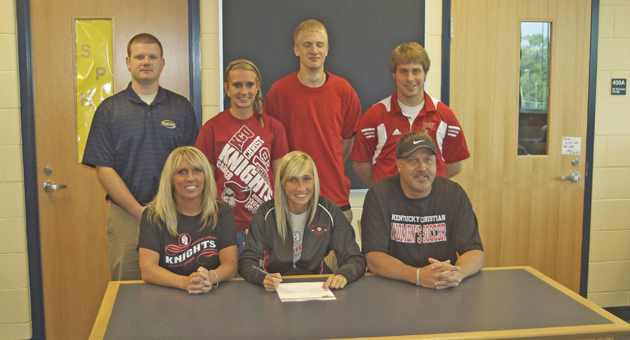 SOUTH POINT — Going away will be going home for Erin Dillow.

The South Point Lady Pointers’ soccer standout looked over the possible colleges she liked and ,after visiting Kentucky Christian University, she made her decision to play the sport for the Lady Knights.

“When I visited KCU, it felt like home to me. I knew it was the right place for me,” said Dillow who also entertained offers from other programs such as Rio Grande, Shawnee State and Heidelberg.

The all-district performer has been playing soccer since she was very young. However, she was also the starting point guard on the basketball team and she ran track for the first time this year.

But she admitted that multi-tasking in college sports wasn’t in her plans.

“I’ve played (soccer) since I was in grade school. It was something new to me and I liked it. I want to concentrate on soccer. Playing another sport would be hard. I don’t want my grades to slip,” said Dillow.

South Point coach Zane Joy had nothing but praise for Dillow and he was confident she would succeed at the next level.

“She’s a great player and a great person,” said Joy. “She is definitely a leader on the field. She will do very well in college I can assure you.”

“I knew she could play physically. I want to see if she had the mentality and she did,” said Miller. “Erin is going to be a key part of our 2012 class. I see a lot of future success with Erin.”

Heading to the college level Dillow knows it will be a greater challenge than high school. She just wants to work hard and hope for the best.

Dillow plans to major in nursing.

By JIM WALKER Tribune Sports Editor   PROCTORVILLE — It was supposed to be a tournament game, but Chandler Fulks... read more