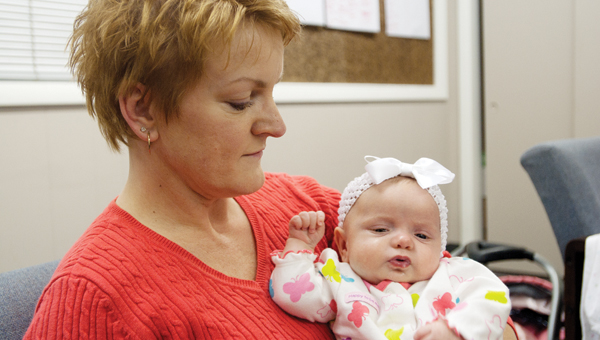 Angie Chamberlin holds her baby daughter, Lauren Faith, the child she gave birth to after 17 years of marriage and at the age of 46.

In previous years, Angie Chamberlin has celebrated Mother’s Day by focusing on other mothers, but this year the 46-year-old Franklin Furnace woman will have one beautiful reason to celebrate the day in her own right.

On March 4, after 17 years of marriage, Chamberlin and her husband, Brent, became proud parents of Lauren Faith Chamberlin.

Baby Lauren is a gigantic surprise: Mom and Dad had given up on having their own kids.

“I had a hard time with it in my 20s and 30s,” Chamberlin admitted. “I really wanted a baby.” But by her 40s, Chamberlin said she had made peace with the idea, “it would just be Brent and me.”

But all that changed in mid-July last year when Chamberlin thought she was going through menopause, only to discover the child they thought they would never have was, astoundingly, only months away.

At first, the Chamberlins didn’t believe the at-home pregnancy test, but when the doctor congratulated them, “I was numb,” she said. “I was shocked.”

A family gathering took on a whole new meaning when Angie and Brent made a quiet and humorous announcement via a birthday card.

“They all got this deer-in-the-headlights look,” Angie recalled. “It took 20 minutes to convince them.”

No convincing was needed when Lauren Faith made her debut into the world. Lauren was a name Mom had always liked. Faith was for a family friend who died when she and Chamberlin were young.

“Everything I have ever known I my life has changed,” Chamberlin said. “I had always been this organized, structured person. There is nothing structured about being a new mom.”

At 10 weeks, Lauren shows a preference for music and that makes the folks happy. Both parents come from musical families so, “We hope to have her on stage as soon as she can hold a microphone,” Angie said.

Lauren is, quite simply, “The best thing in the world,” Chamberlin said. “Everyone told me how it would be and they tried to explain how I would feel (about being a mother) but you never know until you experience it yourself.”

Community Health Day set for May 19

Community Hospice along with the Lawrence County Health Department and Care Source will host a Free Community Health Day on... read more