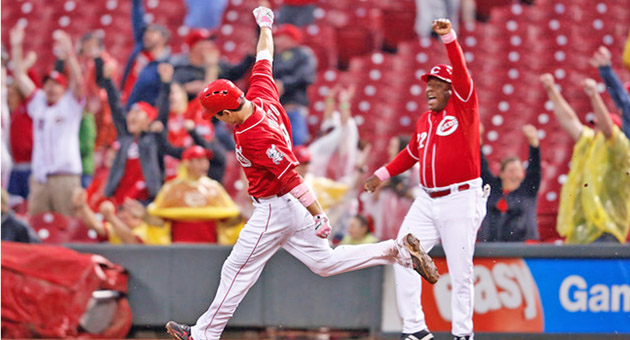 CINCINNATI — Joey Votto is finally swinging like an MVP again.

Votto hit a grand slam in the ninth inning for his third home run of the game on Sunday, rallying the Cincinnati Reds to a rain-delayed 9-6 victory over the Washington Nationals with the biggest game of his career.

Votto hit solo homers in his first two at-bats and finished with his second career slam, thrilling a sparse crowd that sat through a long delay and then more rain to see an improbable finish.

The Reds said it was the first time in major league history that a player hit a game-ending grand slam for his third home run, according to research by the Elias Sports Bureau.

“You like to see Joey hitting like that,” Reds manager Dusty Baker said. “I keep telling the guys you’ve got to believe.”

Washington came into the game with only 15 homers allowed all season, fewest in the majors. Votto broke out of a power drought and helped the Reds avoid a sweep with three perfect swings.

“Everybody talks about how he’s treading water,” teammate Drew Stubbs said. “Then he has a game like that. He wasn’t far from hitting five. Hopefully, he’s back to what he used to be.”

The first two homers came off starter Edwin Jackson, ending Votto’s drought of no homers since April 30. The slugger also doubled and flied out to the warning track.

Votto has been trying to smooth out his swing.

“It’s certainly a work in progress, but I think I hit more barrels today than I have all season,” he said.

He got his chance for the last-swing drama when Nationals closer Henry Rodriguez (1-3) got into the game and couldn’t get comfortable on the wet mound. Rodriguez walked two batters with two outs to load the bases, including Chris Heisey after getting ahead in the count 0-2.

Washington manager Davey Johnson came out to visit Rodriguez, who repeatedly scraped at the wet mound with his cleats.

Rodriguez left a 2-2 pitch up and over the plate for Votto, who hit it over the wall in center. The 2010 NL MVP finished with a career-high six RBIs and the second three-homer game of his career.

It was Votto’s best day since he signed a new deal before opening day that added 10 years and $225 million.

“He did today what he’s been known to do,” Jackson said. “That’s what he got paid a lot of money to do.”

The last player to hit a game-ending home run in a three-homer game was Albert Pujols for St. Louis against Cincinnati on April 16, 2006, according to STATS LLC.

Giancarlo Stanton also hit a game-ending slam Sunday for Miami against the New York Mets, making it the first time in 14 years that there were two walk-off slams on one day, STATS said. Mo Vaughn connected for Boston and Steve Finley for San Diego on April 10, 1998.

Sean Marshall (1-2) got the win at the end of the long day. The start was delayed 3 hours, 36 minutes by rain, which continued to fall throughout the 3-hour, 45-minute game.

Ahead 6-3, the Nationals couldn’t close out what would have been their first three-game sweep of the season. The Reds got two runs in the eighth when rookie right fielder Bryce Harper lost Jay Bruce’s two-out fly ball in the twilight sky, letting it fall way behind him for a double.

Then, Washington’s fill-in closer let it slip away, concluding a painful one-week trip.

Right fielder Jayson Werth had surgery on his broken left wrist Monday, and Harper needed 10 stitches for a self-inflicted gash above his left eye on Friday after he hurt himself slamming a bat against a wall near the dugout. Catcher Wilson Ramos tore the anterior cruciate ligament in his right knee while chasing a passed ball Saturday night.

Despite sending 11 players to the disabled list already this season, the Nationals had managed to stay atop the NL East because of their pitching staff, which leads the majors. For one of the few times, it let them down, and Washington dropped into second place behind Atlanta.

NOTES: The Nationals headed out for a seven-game homestand, including two games each against San Diego and Pittsburgh and three against Baltimore. The Reds left for an unusual seven-game trip: Atlanta for two games, then on to New York for two against the Mets and three against the Yankees. … The Nationals called up C Sandy Leon from Double-A Harrisburg. … Harper wore a bandage over his left eye for the second straight game and had a pair of singles, ending his 0-for-9 slump in Cincinnati. … Reds 3B Mike Costanzo, called up to replace injured Scott Rolen, made his big league debut as a pinch-hitter in the fifth and hit a sacrifice fly on the first pitch.