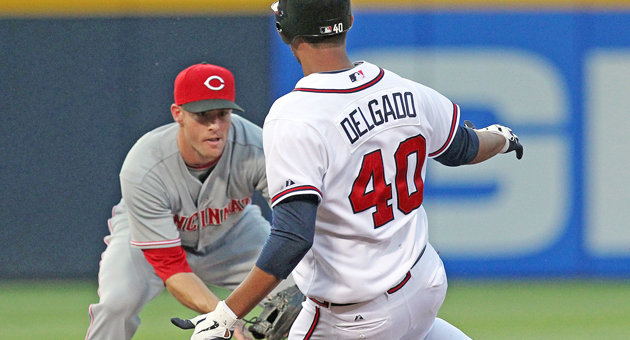 Cincinnati Reds Zack Cozart waits to make the tag on Atlanta Braves pitcher Randall Delgado, who is out at second trying to stretch his single into a double during third inning action at Turner Field in Atlanta on Monday. (The Ironton Tribune / MCT Direct Photo)

ATLANTA (AP) — Brandon Phillips wasn’t sure what pitch he hit from Jonny Venters. He just knew it gave the Reds the lead.

Phillips drove in the go-ahead run with a double high off the centerfield wall and the Cincinnati Reds scored two runs off Jonny Venters in the eighth inning to beat the Atlanta Braves 3-1 on Monday night.

“To tell you the truth, I told everybody I didn’t know,” Phillips said. “I think it was a slider. I think he hung a slider down the middle.

“I was just trying to find something to drive and stay down the middle because I’d been getting jammed all day. I just said I’ve got to get the head (of the bat) out some kind of way. He left one right there and I just took advantage of it.”

Venters confirmed it was a slider.

Venters (2-2) gave up three hits and two runs in one inning. He has a blown save and a loss in his last three appearances.

“I’m making a lot of non-competitive pitches. Pitches that guys aren’t even thinking about offering at. And then making even worse pitches over the plate and they’re hitting the ball hard.”

The game was tied 1-1 when Drew Stubbs led off the eighth with an infield hit between the pitcher’s mound and third base. Stubbs moved to second base on a wild pitch from Venters. With one out, Phillips drove in Stubbs with the double.

“To tell you the truth, I’m just happy I hit the ball out of the infield,” Phillips said.

Chris Heisey added another double, his third hit of the game, to drive in Phillips.

Braves first baseman Freddie Freeman left the game after the seventh inning with blurred vision in his right eye. He left Turner Field to be examined by Dr. Alan Kozarsky, the team’s eye specialist.

Sean Marshall pitched the ninth for his sixth save. Pinch-hitter Matt Diaz was stranded at first base after hitting a leadoff single.

The Braves began the night in sole possession of first place in the NL East for the first time this season.

Logan Ondrusek (3-0) gave up one hit and one walk while recording two outs. Ondrusek has not allowed a run in 17 appearances this season.

“He threw a heck of a game against a very tough lineup, especially a very tough left-handed lineup,” Baker said. “It’s the best game he’s thrown this year.”

Atlanta’s Randall Delgado allowed one unearned run on four hits and three walks with four strikeouts in 6 2-3 innings. He has three losses and two no-decisions since winning his first two starts.

The Braves loaded the bases in the eighth against Ondrusek and Aroldis Chapman. Chapman struck out Jason Heyward to end the inning.

The Reds scored the first run of the game on an unusual error in the fourth. Back-to-back singles by Jay Bruce and Heisey left runners on first and second with two outs when Todd Frazier hit a grounder to rookie shortstop Tyler Pastornicky.

Heisey was running from first on the play, so second baseman Dan Uggla did not cover second base, apparently thinking there was no chance for a play at the bag. Pastornicky fielded the ball and instead of throwing to first made a quick pitch toward second base. Bruce scored the unearned run from second on Pastornicky’s throwing error.

“All I can do is make sure it doesn’t happen again,” Pastornicky said.

The Braves tied the game in the fifth. With one out, Michael Bourn tripled into the right-field corner. Martin Prado followed with a fly ball to shallow right field. Bourn tagged and scored when catcher Devin Mesoraco couldn’t handle Jay Bruce’s throw from right field.

One day after having four hits, including three homers, Votto was 0-for-2 with two walks.

Notes: Delgado walked Votto on four pitches in the first inning after striking out Zack Cozart and Stubbs. Votto led off the sixth with another free pass. His 33 walks lead the major leagues. … Prado was turned the wrong way when tracking Bruce’s line drive in front of the left-field wall in the sixth but recovered at the last second to make a lunging catch. … The two-game series ends on Tuesday night when Reds’ right-hander Johnny Cueto (4-0) faces Tim Hudson (1-1). Hudson is 3-1 in six career starts against the Reds.

By JIM WALKER Tribune Sports Editor   AID — Cody Myers had a memorable career, and his final game is... read more