LV, Dillow get past Lady Dragons 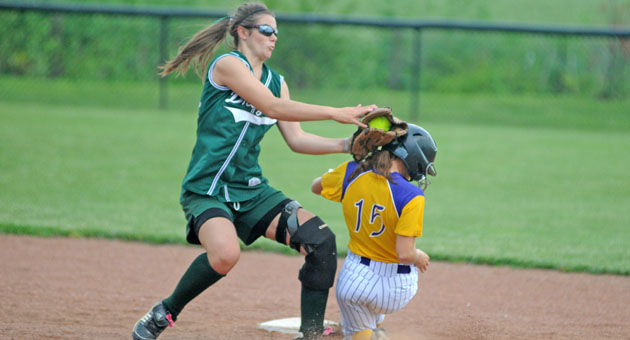 McDERMOTT — The game of softball comes down to pitching. Case in point was Wednesday’s Division III district semifinal game.

Lucasville Valley’s Braiden Dillow and Fairland Lady Dragons’ Chandler Fulks hooked up in a pitching duel with Dillow turning in another dominating performance in a 5-2 win.

Dillow — who is headed to Bowling Green — ran her record to 23-0 as she pitched a three-hitter, struck out 15 and walked just one.

Fulks (16-6) gave up six hits, struck out five and walked three. Three of the hits were bloop singles and another was of the infield variety.

“They didn’t hit Chandler that hard, but we couldn’t hit Dillow. You can’t score if you don’t at least make contact and put the ball in play,” said Fairland coach Joe Auxier.

With two outs, Caitlin Stone drew a walked and scored on a double by Chelsey Stanley when the throw home was bobbled. Jaimie Phillips followed with a double to score Stanley.

Lucasville Valley got a run back in the bottom of the inning when Dillow got a bloop single, Ashley Webb reached on an error, Brooklyn Moore walked and Elysia Montgomery singled.

The Lady Indians came back to score four runs in the third inning to decide the outcome.

Mari Malizio beat out an infield hit into the hole at shortstop, Emily Richard walked and Brooke Cooper drove in a run with a bloop single.

Kayla Koch then hit a weak pop fly single into centerfield to drive in two runs and Dillow grounded out as the final run scored.

“We felt we could play with them, but they had the one big inning and then we couldn’t hit Dillow,” said Auxier.

Phillips had Fairland’s other hit when she had her second double in the sixth inning.

By JIM WALKER Tribune Sports Editor   OAK HILL — If day two is anything like day one, the Coal... read more