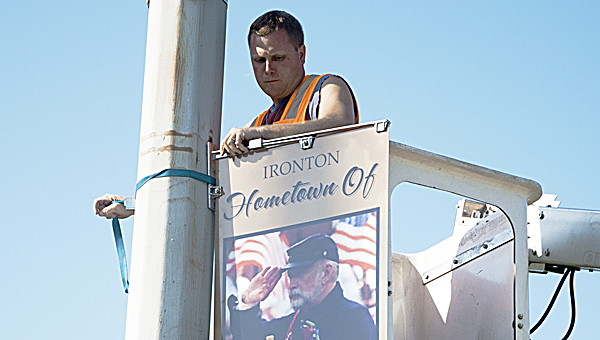 Ricky Jenkins installs a banner honoring the late Judge Frank McCown Wednesday morning. The banner is located on the corner of Liberty Avenue and State Route 141 on the entrance to Ohio University Southern.

On the anniversary of his passing, city workers Wednesday erected a banner at the entrance to Ohio University Southern in honor of the man who was also a professor at the university.

His widow, Ella McCown, who is also a professor at OUS, said she wanted a fitting way to remember McCown. On what would have been his birthday in February, McCown said she began thinking about what should be done to honor the memory of a man who had been a public servant and volunteer for many community causes.

“Back in February I knew the day (May 16) was coming and I didn’t know what to do. I was driving past the courthouse and saw those banners for other people,” she explained. She spoke with city officials and to Lou Pyles, who had served with the late judge on numerous committees and boards over the years. They all agreed a banner would be an appropriate memorial and the entrance to the university seemed the perfect place to hang it.

“I am frequently stopped by people who tell me that Frank had such an impact on them,” McCown said.

The photograph of Frank McCown was taken in 2004, the year he was grand marshal of the Ironton-Lawrence County Memorial Day Parade. He was wearing a Civil War uniform. Some have questioned why the photo is not one where he is wearing his judicial robe. McCown said the answer was simple, the photograph was good and captured another facet of a multi-faceted individual, that of a volunteer.

Pyles described Frank McCown as, “an individual who was constantly seeking ways to give back to his community. He told me once you get a good feeling when you give back. He was a very caring individual.”