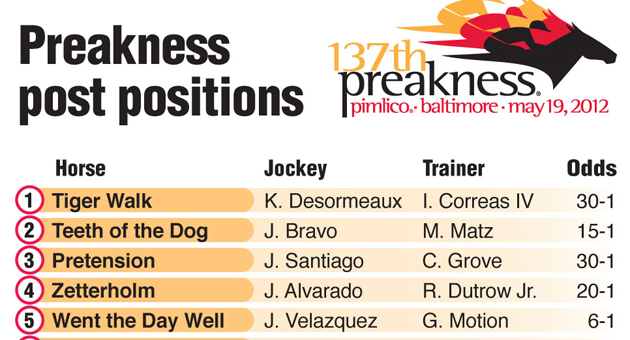 Table with post positions for the 137th running of the Preakness May 19, in Baltimore, Md.

BALTIMORE (AP) — A year ago, Graham Motion was one of the most popular figures at Pimlico Race Course.

As the trainer of Kentucky Derby winner Animal Kingdom, Motion had the lone horse in the Preakness field with a shot at winning the Triple Crown.

“The pressure is on you,” the Englishman recalled Thursday. “The two weeks between the Derby and the Preakness, I felt like I was holding my breath. You’re kind of walking on egg shells, hoping everything is going great with the horse.”

Animal Kingdom came in second in the 2011 Preakness, a half-length behind Shackleford. Motion can’t get the outcome out of his mind — no matter how hard he tries.

“We came that close,” Motion said, holding his index finger and thumb a half-inch apart. “I was quite shocked to see Shackleford’s picture on the grandstand when I drove in this morning. That was kind of a pit in my stomach.”

Motion will saddle Went the Day Well in the Preakness on Saturday. The bay colt finished fourth in the Derby two weeks ago but has won two of his four starts this year.

Went the Day Well was bumped at Churchill Downs and forced to go seven wide in an effort to catch up. He rallied gamely under jockey John Velazquez, but couldn’t quite make up enough ground to finish in the money.

“He ended up much farther back than Johnny wanted in the Derby, and that’s probably what cost him being second. Maybe cost him the win,” Motion said. “It’s all about getting a good trip. There’s always going to be a horse in the Derby that doesn’t get a good trip, and that’s what makes it so hard to win the Triple Crown.”

If Motion has his way, horse racing will go another year without a Triple Crown winner. I’ll Have Another has assumed the role held by Animal Kingdom last year, and Motion is determined to deny the Derby winner from making it two in a row.

Motion has been operating in relative obscurity this week while I’ll Have Another trainer Doug O’Neill and Bob Baffert, trainer of Preakness favorite Bodemeister, are attracting much of the attention.

“I’m more comfortable being under the radar,” Motion said.

He did, however, acknowledge that last year was far more exciting.

“You come to the Preakness with the Derby winner, that’s pretty cool. It doesn’t get any better than that,” he said. “I’m more relaxed about it because the Triple Crown is over for us.”

Barry Irwin heads the syndicate that owns Went the Day Well. That same syndicate owned Animal Kingdom, so Irwin can certainly sympathize with the way Motion is feeling this week.

Irwin is excited about Saturday’s race, but nothing can duplicate the feeling had before last year’s Preakness.

“It’s more intense because you know everybody’s concentrating on it and focusing on it,” he said. “It’s not just me and my partners, it’s everybody. So that adds a layer of tension to it.”

Irwin hopes Bodemeister and I’ll Have Another get into a speed duel and fade toward the finish of the 1 3/16th mile race, providing Went the Day Well the opportunity to swoop in and steal a victory.

“In the best of all possible worlds, I think Bodemeister, that Derby race has got to tell something on him,” Irwin said. “You can’t run as fast and as hard as he did and not have it affect you. I’ll Have Another, if he wants to win the Triple Crown or win the Preakness, the onus is on him to go after Bodemeister. And if both those things happen, and my horse breaks cleanly, I hopefully will be the beneficiary.”

NEW YORK (AP) — Aroldis Chapman left the game with his 0.00 ERA intact. Yet the rocket-armed reliever and his... read more