I’ll Have Another has another 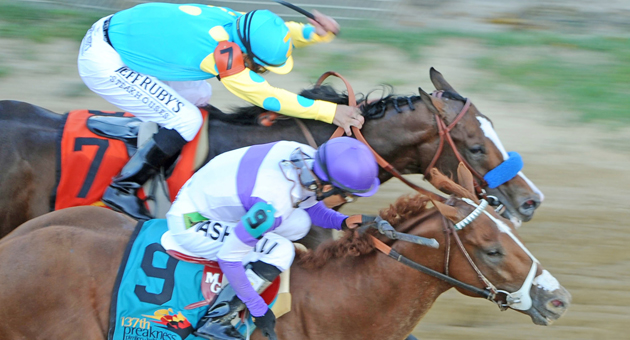 I'll Have Another (9) overtakes Bodemeister (7) in the final stretch to win the 137th Preakness Stakes at Pimlico Race Course on Saturday in Baltimore, Md. (The Ironton Tribune / MCT Direct Photos)

BALTIMORE (AP) — I’ll Have Another waited a little longer to catch Bodemeister in the stretch this time, and now that he’s done it twice in a row it’s time for a Triple Crown try in the Belmont Stakes in three weeks.

With a breathtaking closing rush, the smooth-striding colt won the Preakness Stakes by a neck at Pimlico Race Course on a sunny Saturday, a dramatic finish that topped his win two weeks ago in the Kentucky Derby.

The race unfolded the same way as the Derby, with the speedy Bodemeister moving to the lead under Mike Smith, with I’ll Have Another hanging back in fourth in the 11-horse field. The early fractions were slower than the Derby, but when it came time for Bodemeister to hang on, I’ll Have Another found another gear under young jockey Mario Gutierrez and ran down trainer Bob Baffert’s horse in the shadow of the wire.

It’s been 34 years since Affirmed swept the Derby, Preakness and Belmont and became the 11th and most recent Triple Crown champion. Since then, 11 horses have won the first two legs only to come up short in the Belmont. The most recent try came in 2008, when Big Brown was pulled up around the turn for home and did not finish. Before that, Smarty Jones was run down in the final 70 yards by Birdstone in the 2005 Belmont.

If margins are an indication, perhaps I’ll Have Another has a Triple Crown in his future. Affirmed won the Derby by the identical 1 1/2 lengths over Alydar, and then beat his rival by the same neck margin in the Preakness.

“I didn’t feel confident we were going to get there until 10 yards from the wire,” owner J. Paul Reddam said.