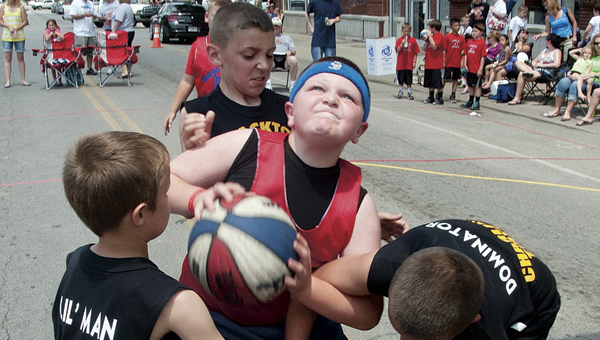 Brady Clark, with the Ram Trotters, is surrounded by members of the Blacktop Ballers at the Gus Macker 3-on-3 Basketball Tournament.

By 7:30 Saturday morning, Donnie Arthur had already made the trip from Proctorville and scoped out a prime spot on South Second Street to see his son, Immanuel, play some basketball.

That’s because this weekend was Gus Macker time as the basketball tournament came for the eighth straight year to Ironton with the rounds of 3-on-3 games.

“They have set this up nice,” Arthur said. “There’s the camaraderie here. And my son loves basketball.”

Immanuel Arthur, sporting a No. 10 on his jersey, was playing on the Ballaholics, a team made up of his buddies from Fairland Middle School. Keith Burd, their coach, came from Jackson to help his team strategize for hopefully what would be a Saturday and a Sunday of basketball.

“This is more intense,” said Burd, who was coaching a team in the Macker competition for the third year. “They learn not to whine and complain and they build their strength in playing.”

The tournament kicked off at 8 a.m. with emcee Randy Drewyor, from the Macker organization, revving up the crowd that had gathered on Depot Square watching players practice layups on center court.

“Is the band fired up?” he called out to the Ironton High School marching band. “We are really excited to be back in Ironton. It takes a lot of people to make this happen.”

Behind the scenes is dozens of volunteers including Ironton businessman Bob Clyse, who this year got to try for the opening basket.

When his first shot missed, Drewyor asked, “Did he make it? The sun’s in my eyes. Let’s try again.”

The second time proved the charm with Clyse nailing it from the imaginary three-point line.

Then after Susan Taylor sang “The Star Spangled Banner,” the teams took to the taped off courts on South Second Street.

Nearby Scott White was coaching the all-girl Sterling Stars from Ironton schools.

“These girls love basketball. They just love it,” said White who was back for his second time at the Macker and prefers coaching a distaff team.

Down the street the Blacktop Kings were getting ready to play after an hour-long trip from Rowan County. As they did some practice shots their coach Chuck Mitchell voiced his approval for the community tournament.

“This kind of activity builds a lot of unity,” he said.

Bullying on the rise, experts say

Social media adds new layer to problem that crosses all ages Mary Ann may be in high school now, but... read more