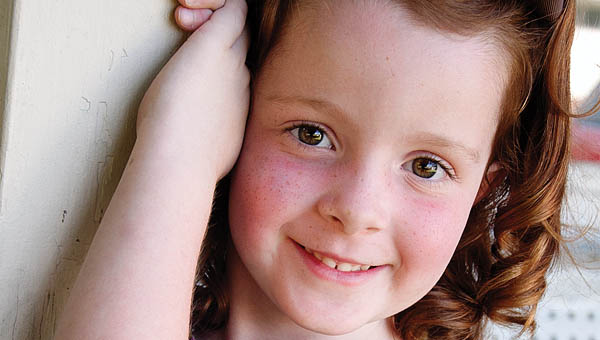 Five-year-old Emma Triplett will be leaving at the end of July to compete in the Miss Ohio Princess pageant. Emma was accepted as a finalist at the National American Miss Pageant.

For 5-year-old Emma Triplett of Ironton, being a little girl and just having fun is a full-time job.

The freckle-faced redhead likes to play outside and is on a T-ball team.

Her mother, Melissa, said she is outgoing and loves to talk.

And it is because of Emma’s gregarious manner that she earned a spot in the National American Miss Ohio Princess competition this July.

Melissa said Emma received a letter in the mail inviting her to an open call in Cincinnati, where she had a photo shoot and interview to qualify for the statewide pageant.

“They wanted girls who smiled and made eye contact and who were not really reserved,” Melissa said.

When the family got the call Emma had made it, Melissa said Emma just screamed.

As excited as Emma is to compete in the pageant with other 4- to 6-year-olds, Melissa said her daughter knows it’s not all about winning.

Last year, Emma saw an episode of the reality TV series, “Toddlers and Tiaras,” which peaked her interest in pageantry.

“Of course, I don’t think the spray tans and all the makeup is something I would let her do,” Melissa said. “That’s not what I think it should be about with her.”

“She didn’t win anything, but she said, ‘Mom, that was so much fun,’” Melissa said.

Just a few months ago, Emma won title of Queen for her age division in a pageant in Coal Grove.

“That didn’t faze her either,” Melissa said. “She just has fun and gets pleasure out of doing it in general.”

The upcoming statewide pageant is July 27-28 in Columbus. If Emma wins, she has a chance to compete in the National American Miss Princess pageant in California.

Emma’s fees are $530 and Melissa said some individuals have already sponsored her. Melissa also said any businesses that would like to donate would be recognized at the pageant and the donation is tax deductible.

To find out how to donate to Emma or for more information, Melissa can be reached at (740) 479-1901 or melissa.triplett@nationwidechildrens.org.

The president of the company that has been remediating the former Ironton Iron site has told city officials the plot... read more