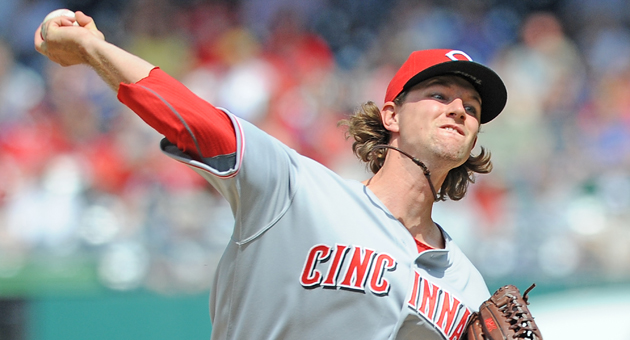 CINCINNATI (AP) — Mike Leake was a sophomore at Arizona State the last time he got to round the bases at his own pace. Three years later, he finally got to do it again in the major leagues.

The right-hander hit his first career homer — the first of three solo shots in a row — and allowed only two hits over eight innings Monday night to lead the Cincinnati Reds to a 4-1 victory over the Atlanta Braves.

When Leake connected on a 1-2 pitch from Mike Minor (2-4) with two outs in the fourth inning, he sprinted around the bases with no outward show of celebration. Then, he sat in the dugout and watched Zack Cozart and Drew Stubbs also go deep within a 10-pitch span.

Leake (1-5) finally got his first victory in eight starts this season, doing a little bit of everything. He struck out a season-high six and retired 14 in a row after Juan Francisco homered in the second inning.

“He was outstanding,” said Stubbs, who had two of the Reds’ four homers. “That was a big performance for him. He’d been struggling. That should be a big boost for his confidence. I’m glad to see it.”

All the runs scored on solo homers at one of the majors’ most hitter-friendly ballparks.

The Braves had a chance to tie it in the ninth, when the Reds’ lack of a proven closer came into play again.

Jose Arredondo walked two batters with two outs before Sean Marshall retired Jason Heyward on a fly ball for his eighth save, completing the two-hitter.

Reds manager Dusty Baker did not use reliever Aroldis Chapman, who pitched in four of the previous five games. Chapman saved Sunday’s 5-2 victory over the Yankees and Baker said Monday the hard-throwing lefty will get more chances to close when he’s rested.

After the game, the Reds learned that Chapman had been arrested in central Ohio early Monday for speeding and driving with a suspended license. He has a court hearing set for June 6.

Minor had a strange outing. He went six innings and yielded five hits, four of them homers.

“I don’t think it was the ballpark,” Minor said. “The pitches were up, and that’s what they did — home runs. They were sitting on my best pitch tonight, which was my changeup. Three of the four homers came off changeups.”

The Reds were coming off a successful stay in New York that included three wins in five games against the Mets and Yankees. Back home, they got the best of another homer-filled game at Great American Ball Park.

Leake gave up a homer deep into the Braves’ bullpen by Francisco in the second. The Reds gave up on the third baseman during spring training and traded him to the Braves for reliever J.J. Hoover.

The Braves got only one other runner as far as second base against Leake, who threw 98 pitches and walked one.

Stubbs started the Reds’ biggest homer splurge of the season by connecting in the first inning. The Reds wasted a chance to break the game open in the second when Joey Votto flied out with the bases loaded.

Leake hit a high, 1-2 pitch into the stands in left field with two outs in the fourth. He sprinted around the bases without fanfare, then got a congratulatory knuckle bump from Baker on the top step of the dugout.

Cozart was in a 3-for-28 slump when he followed with another homer three pitches later, the fourth of the season for the rookie shortstop. Stubbs came to bat, ran the count full and hit his fifth homer. It was the first time three Reds batters homered in succession since Sept. 10 at Colorado, when Chris Heisey, Votto and Jay Bruce did it against Alex White.

After Stubbs rounded the bases for the second time and got congratulations from everyone in the dugout, he stopped by Leake for a brief chat — about hitting, no doubt.

Chipper Jones was out of the Braves’ lineup for the third consecutive game with a swollen left calf, hit by a batted ball on Friday night. The Reds have put Jones’ name on the side of the bases for the series, honoring him in his last season before retirement. Jones expects to miss another game or two.

NOTES: Brandon Beachy makes his second career start against the Reds on Tuesday. Mat Latos is 2-2 in five career starts against the Braves. … The Reds hadn’t hit more than three homers in any game before Monday. The Braves hadn’t allowed more than three. … Caleb Lloyd, a 20-year-old Reds fan in left field, caught two of the three homers in the fourth inning, one off a carom. … The Reds will honor Jones on the field before the final game of the series Thursday, presenting him with one of the bases.

Chapman’s arrest may keep him from closer role