Navy Night will be 7 p.m. Thursday 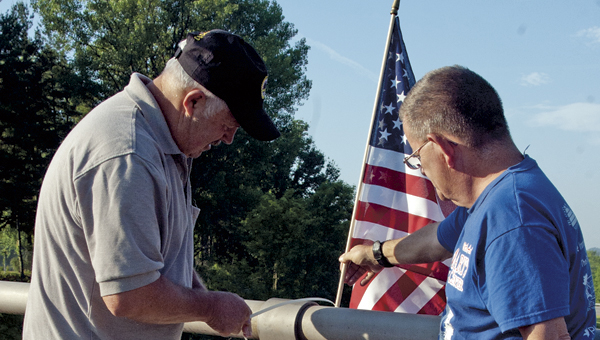 Volunteers Miles Lewis and Joe Sharp attach an American flag to the railings of the Woodland Cemetery overpass above U.S. 52 Monday morning. This is in preparation for the annual Veterans Memorial Service in the soldiers section of the cemetery at 2 p.m. Sunday and the 144th annual Ironton-Lawrence County Memorial Day Parade that begins at 10 a.m. Monday in Ironton.

Memorial Day is to Lawrence County what New Year’s Eve is to New York City or Christmas is to other locales.

It is, without question, the biggest event on the calendar and the myriad of activities saluting the sacrifices of the armed services’ past and present begins Thursday with the annual Navy Night service at 7 p.m. at the Center Street Boat Landing.

The speaker for this year’s event is Lt. Col Scott Evans (Ret.). The master of ceremonies will be Lawrence County Common Pleas Presiding Judge Charles Cooper.

This event is meant to be a tribute to the sea-going branch of the armed services.

At 2 p.m. Sunday, the annual Veterans Memorial Service will take place in the soldiers section of Woodland Cemetery. The speakers will be Veterans of Foreign Wars State Commander Chuck Keller, Col. (Ret.) Terry Johnson and commander. Brigham McCown, who is a senior aviation battle space manager for the Commander of the U.S. Navy’s Seventh Fleet.

The grand finale is the 144th edition of the Ironton-Lawrence County Memorial Day Parade, which begins at 10 a.m. Monday. The parade procession begins at the corner of Fourth and Center streets, continues down Center to Third Street, turn left onto Third and continues to Quincy Street. After a left turn on Quincy Street, the procession continues to Sixth Street where it makes another left turn and ends at the courthouse. More than 2,000 are expected to participate in the parade. An estimated 20,000-25,000 will line the procession route.

Lawrence County’s parade is the oldest continuous Memorial Day Parade in the nation. The theme this year is “For God And Country.”

Body found in Ohio River could be missing Proctorville man

PROCTORVILLE — The search for a missing Proctorville man may turn into a murder investigation. Sunday night the body of... read more