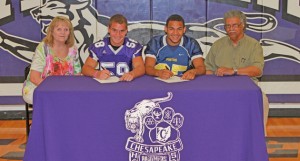 CHESAPEAKE — After trying to beat each other the past four years, Chesapeake’s Taylor Banaei and South Point’s Josh Payne are about to join forces after signing to play at Marietta College.

And why not? After all, they are family.

Even though both players are seniors, Banaei is actually Payne’s uncle.

“We work good together. We never argue,” said Payne.

Banaei said there were occasions when they would collide on the football field, but they understood it was part of the game.

“There were times we were hesitant,” said Banaei. “You don’t want to unload on family, but you’re going to do your best.”

Payne said the two know each other well since they have spent time together on and off the field.

“He still knows me out on the field. He’s not head-hunting, but he’s not going to take it easy. He’s just not coming to knock me out,” said Payne.

Banaei had 87 tackles with five for a loss and he led the team with eight quarterback sacks.

“He’s another kid who worked as hard on the field as he did in the classroom,” said Panthers’ coach Andy Clark. “Taylor’s motor is always going. You don’t have to get on him. He did a great job at weak-side end. He was like an outside linebacker for us.

“Taylor played bigger than his size. He held his own against bigger guys and not just with his quickness. He has room to put some weight on.”

Both players expect to play a different position for Marietta. Banaei will probably play outside linebacker while Payne plays more like a monster back.

“I want to play defensive end, but it doesn’t matter. I just like defense,” said Payne. “I’ve always relied on three things: focus, preparation and determination.”

“I know it will be an adjustment in the skill level,” Banaei said.

Payne wants a career in athletic training and Banaei plans to major in petroleum engineering.

“I never want to get away from sports,” said Payne.

You can ‘Banks’ on it

Eric Banks ­— a senior at South Point High School — started lifting weights in his basement when he was... read more