It wasn’t long after the young woman saw the sky turn black from what seemed like endless waves of military aircraft deployed to battle that she herself stepped foot on the beach at Normandy, France.

Garnet Keffer, just 21 years old, from Boyd County, Ky., was about to climb the beach’s steep hill and behold the destruction the D-Day invasion had left behind.

And as a nurse in Gen. George Patton’s Third Army, the path of destruction she followed through Europe was a long one. 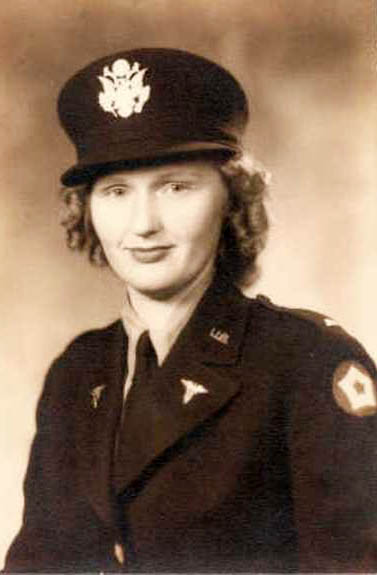 Dr. Kim Keffer, coordinator of the first year experience at Ohio University Southern, had the opportunity to interview her aunt Garnet, for a special presentation at the Proctorville Center about women in the military last year.

Keffer said her aunt’s stories left an impression of patriotism and empowerment with her.

“One of the things I asked her was, ‘as a female, at a time when women really were not perceived as being as capable and as out there as their male counter parts, what was it that convinced her that she had to sign up,’” she asked her aunt.

Keffer said her aunt Garnet simply said, “It was needed. Scratch a southerner and you’ll find a patriot. I had the ability. I had the skill. That’s what they were looking for. I went.”

During WWII, the need for nurses was immense. So much so that the military was considering a draft.

Garnet had just graduated from St. Mary’s School of Nursing and felt the call to serve her country and, in November 1943 after she turned 21, she signed up.

Keffer said Garnet was itching to serve on the battlefield, but was instead sent to White Sulfur Springs, W.Va., to serve at Ashford Hospital.

Garnet was treating children and wives of the officers, not what she signed up to do.

It was suggested to Garnet that if she really wanted to go to Europe, she should draw attention to herself negatively.

So Garnet disobeyed orders and took a leave more than 50 miles away from the base. Her punishment was reassignment to Europe.

She trained in Tennessee and Texas, marching miles and miles in the mud, practicing moving the mobile hospital supplies and setting it up and tearing it down.

“Her unit sailed to Scotland on the Queen Mary, then rode a train to Stone, England. They were originally attached to the First Army under Omar Bradley, but later attached to Patton’s Third Army,” Keffer said.

Garnet was among the first group of women to land on the beach at Normandy with the 35th Evacuation Hospital.

“When they got to the top of the hill,” Keffer said. “There were stacks and stacks of bodies that had not yet been dealt with. And that didn’t even include the wounded.”

As a nurse with limited supplies and time, Garnet had to make life and death decisions: Who could she save?

“Those you did not think you could save, you didn’t have time to work on,” Keffer said. “You had to skip over those.”

Keffer also said Garnet followed Patton through the Battle of the Bulge.

“Instead of seeing soldiers who were mangled from bullets, they were seeing people who were frozen to death,” Keffer said. “They were frozen or starving.”

Another trying time for the young nurse was liberating prisoners from the Buchenwald concentration camp in Germany.

“Buchenwald was very hard for her to talk about,” Keffer said. “Still, she doesn’t have much to say. But she did say to me even with everything she had already seen, nothing compared. These people were husks. They were starved. Buchenwald had a reputation of being one of the worst concentration camps and she was there with the liberators and the first wave of people to try and help clean it up and treat the people who had been held captive.”

Garnet was in Europe for nearly two years. She earned the European Theater of Operations Medal with five combat stars as well as the Presidential Citation for Buchenwald.

When she came back to the states, being a meek and mild housewife of the 1940s did not interest her.

Keffer said Garnet didn’t stay in Kentucky long before she moved on to Texas and then to California, working as a nurse on military bases before she was officially released from service.

The older generation of nurses didn’t seem to understand what she had been through, Keffer said.

Keffer asked her aunt what it was like to come back and be subservient nurses and give up their seats at the drop of a hat to any male doctor who ordered so.

“Nobody liked us. We were young. We had done it all. We felt invincible,” Garnet said. “You go crawl through the muck and the mire. You go take care of people who have been brutalized the way we saw at Buchenwald, at Battle of the Bulge, at Normandy. And once you’ve done everything I’ve done, then you can talk to me about ‘stand up for the doctor.’”

Garnet, now 92 and living in California, still has a strong sense of patriotism and a great respect for Patton.

“It wasn’t until I was an adult and had conversations with her that I really realized how great her service was,” Keffer said of her aunt. “To hear people talk about things they’ve done and say to my aunt, ‘Do you have any battle scars?’ … My word, she’s seen everything.”

But what leaves the biggest impression on her, Keffer said, is that her aunt instilled in her that the only limitations in life are the ones we self-impose.

“I learned from her, and continue to learn from her, the only person who gets to define me is me.”