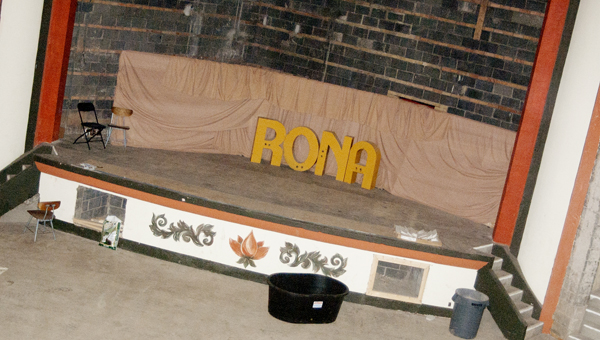 Construction continues at the Ro-Na Theater on South Third Street. The Friends of Ironton will have an open house Monday to show the public the progress made to restore the old building.

People walking past the old Ro-Na Theater will no doubt notice the paint that had darkened the windows and kept eyes from peering inside is gone now.

Now, Friends of Ironton members are inviting folks to not just stop to look in the windows but to come on in Monday between 9 a.m. and 12:30 p.m. for an open house.

FOI member Dave Smith said, while the building is far from complete, a lot of work has been done to clean out and restore the building for use by the community.

“We want to show people around and let them see what we’re doing,” Smith said. “I like to say it’s a diamond in the rough.”

The diamond is getting a cleaning right now.

Plaster that covered walls had fallen and broken over the years. Piles of it are still left and waiting to be loaded up and removed.

If the bones of the building are still in good shape, the FOI, which has an eight-year lease on the building, is adding new muscle. A three-phase electrical system is being added to the tune of $9,000.

Smith estimated the total renovation, which the group is planning and conducting in stages, will cost about $7 million. Heating and air conditioning is also being installed.

A rear area along South Second Street across from the Friends Park sprayground is being renovated to be a “green room,” or a holding room for entertainers. Adjacent to the stage, the green room will have rest room facilities as well.

The community group will spend an estimated $100,000 for the renovation of this area. Smith said plans are in the works now to purchase a building next door to the Ro-Na and it will be used for public restrooms.

Restrooms on the second floor will also be renovated and used. Part of the second floor will be accessed by a new elevator (a first for the building) and used as conference and meeting space. A $70,000 sprinkler system will be installed in the entire building in the coming months, part of the afore-mentioned muscle being added to the building, which brings Smith to a point: In recent months, a few area groups have used the auditorium for concerts and movie showings.

Recently FOI had to halt the use of the building to allow for badly needed construction and installation of utilities. For instance, holes left in the flooring in places could cause injury if someone did not see it and fell through.

The heat and air will make the Ro-Na a more comfortable environment to stage these shows. Smith asked people to be patient while FOI makes some necessary improvements.

“We do need to be careful on what we let happen,” Smith said.

As for the auditorium, construction continues; the balcony is now mostly clean of debris. It and the main seating area will likely hold 1,000 people once renovated. The FOI time frame is, with the help of grants and fundraising, to have the building readied for full-time use within five years.

Dylan Bok of Hilliard, takes part in the bungee run. Nine-year-old Dylan Bok took aim with his dart at the... read more