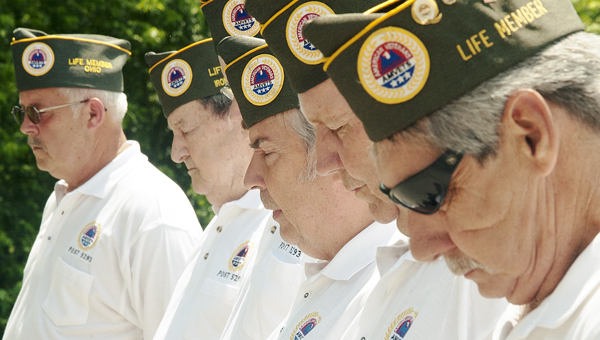 Members of the AmVets 5293 bow their heads in prayer following a flag ceremony Thursday afternoon at Sunset Nursing Home in Coal Grove.

Since 1868, Lawrence Countians have been making very public displays of honor and respect for the men and women who have served their country in wartime.

In that year, General John A. Logan, commander-in-chief of the Grand Army of the Republic, declared May 30, as Decoration Day, a day to honor the fallen soldiers on both sides of the Civil War.

On that day, the citizens of Ironton had the county’s first Decoration Day — as it was called then — observance, complete with a parade. Over the years that celebration has evolved into Memorial Day.

But Lawrence County’s devotion to it hasn’t changed. In fact it’s expanded to a number of activities and observances.

Lawrence County’s sense of patriotism runs deep: Lt. Col (Ret.) Scott Evans pointed out in his Navy Night address Thursday evening that Lawrence County is named for a famous military man, Capt. James Lawrence, who is famous for the saying, “Don’t give up the ship.”

The 144th edition of the Ironton –Lawrence County Memorial Day Parade will begin at 10 a.m. Some 2,000 to 3,000 people will march in the procession; another 25,000 or so will line the parade route and watch.

Near the front of the procession each year, The Riderless Horse walks ahead of the bands, the floats and fire trucks.

With its backward facing boots and black saddle, the horse is a symbol of those soldiers who went away to war and never came back. It is the living embodiment of what the parade is all about.

For the last four decades, the horse used for this has come from the Staley family’s farm.

“My father (the late James Staley) started in 1972. He was asked by Bill Benson who was in charge of The Riderless Horse and the 12th Division,” Dee Staley Best explained. “Whoever had done it before was not able to do so that year.”

That year and for several years that followed, Ramrod, an American quarter horse, led by family friend Phil Knipp, was the Riderless Horse.

“Multiple people have led the horse since then, including me,” Best said.

And more than one horse has performed the solemn duties.

Twister Solace performed the duties several years ago. Best said Twister Solace was the perfect horse for such a call of honor. At 17 and-a-half hands, he stood tall, quite literally (nearly six feet from shoulder to ground). In comparison, this year’s horse, Closing Soon Saloon is 15 hands. The handler will be Best’s daughter, Leslie.

“Some even point and laugh that ‘somebody put the boots on backward,’” Best said. “A lot of parents haven’t taught their children what it is. I would love to take the horse and the uniform and give a program at schools to explain what it is.”

Best said the most touching part of walking with The Riderless Horse is seeing the veterans come up and salute.

“It’s an amazing thing,” she said. “We even had an honorary grand marshal come up and salute.”

Falling in behind that first division, which includes many veterans and veterans organizations, will be 11 more divisions with everything from Smokey The Bear to shriners to marching bands to beauty queens.

Parade committee member Lou Pyles said, in addition to returning old favorites, several new entries will make their debut in the parade: The U.S. Army Corps of Engineers from Yatesville Lake in Lawrence County, Ky., the 355th Minimal Care Detachment, part of the U.S. Army Reserves from Kenova, W.Va., Mrs. Ohio (and Coal Grove native) Deanna Holliday, and the Malone Karate School will all make first appearances, Pyles said. The Cheer Factory, which teaches cheerleading and dance, is another newcomer.

“I thought it would be a wonderful experience for my girls to participate,” said Gina McKee, who operates that studio. “We couldn’t be more excited to be in it.”

Pyles said churches will be well represented and the patriotism of those congregations will be on full display.

“A lot of the churches are putting veterans on their floats and I think that’s nice,” she said.

A dedication for a new Old Glory

Residents and staff at Sunset Nursing Home in Coal Grove watched Friday as the AmVets 5293 replaced their tattered old flag with a crisp, bright, new one.

Veterans, Lewis pointed out, were a commodity that Lawrence County has given in abundance to America over the years.

“Sixty percent of the eligible men in Lawrence County served in the Civil War,” Lewis said in his address to the gathering of residents and staff. “We think also of the families and friends who have supported them (soldiers and veterans) over the years.”

Larry Ashley, one of the residents, thanked Lewis and the others for having served their country.

Russell Edmond Ferguson said he had an uncle, Charles Bragg, who fought in World War II and flew 60 missions before being shot down. Bragg, who was from Huntington, W.Va., is buried in Rome Cemetery.

Miles to go before I sleep

Each year the members of the Veterans of Foreign Wars 6878 in Proctorville spend Monday on the road bringing the solemnity of Memorial Day to soldiers buried in nine area cemeteries. They begin the day at Rome Cemetery at 10 a.m.

“We go to each cemetery and the chaplain will say a few words. We’ll have a prayer and a 21-gun salute,” VFW 6878 Commander Warren Napier said. “It is important for us to do it. This is for the fallen soldier.”

In the case of Rome Cemetery, some of the fallen soldiers are from as far back as the Civil War.

Napier said the post has been having these ceremonies as long as he can remember.

Other salutes to sacrifice

The annual Veterans Memorial Service is at 2 p.m. today at Woodland Cemetery.

Appropriately, it takes place in the soldier’s section of the cemetery.

It is one of two remembrance services the parade committee plans each year. The other was last week’s Navy Night service.