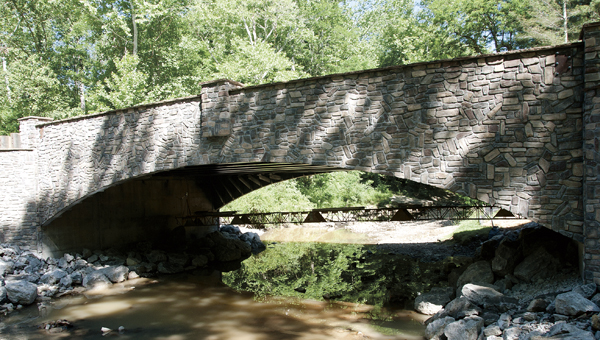 View of the newly reconstructed bridge that provides access to and from the Lake Vesuvius Recreation Area in Elizabeth Township that has been officially opened.

PEDRO — The sunny day on Thursday was a far cry from that devastating day in July 2010, when the massive rains washed out the Lake Vesuvius Bridge.

But, on Thursday, county officials gathered at the new bridge to cut the ribbon in a ceremony that meant the historic structure was back in business.

“It was a bad day in July when we got some bad news that the County Road 29 bridge is out,” Commission President Les Boggs told the dignitaries gathered. “How would we be able to afford a bridge?”

Although inside the Lake Vesuvius Recreation Area, the bridge was an often-used connector for families living nearby needing a way to reach State Route 93.

“The Rock Hill school district had to go seven miles out of the way,” Boggs said.

In the late fall of 2010 a temporary steel structure was erected downstream of the location of the original bridge to accommodate residents who used the road as a major thoroughfare.

Then, with federal funding, a new structure at a cost of $1.3 million was built at the same site. The original bridge was a Civilian Conservation Corps project built in the 1940. It was widened in 1990 and featured two spans whose supports were secured in the creek bed.

However the new design, created by Chris Wilson of the Wayne National Forest Service, has a single span to keep debris from getting caught in the structure.

“It looks pretty similar to that old bridge we got accustomed to and enjoyed to look at,” Tim Slone, ranger at the Ironton district, said.

At the ceremony were current County Engineer Doug Cade and his predecessor, David Lynd, who was involved in the design process.

“I’m glad to see it done,” Lynd said. “It turned out really well, a nice modern bridge that will be a reminder of the old bridge.”

The dream was to build a barn for 4-Hers in the county. Now there are threats of lawsuits, a... read more