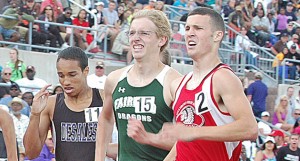 COLUMBUS — There was rain on Friday and then there was Raine on Saturday.

Wireman finished eighth with a 1:58.10 clocking as he edged out Tyler West of Columbus St. Francis DeSales who ran a 1:58.35 time.

Finishing in seventh place just ahead of Wireman was Ryan Adams of Cuyahoga Falls CVCA who had a 1:57.78 time.

Wireman ran a 1:56.56 in the regional meet and was third behind Jarrod Hart of Hillsboro and Adrian Ross of Unioto. Hart finished sixth at the state meet and Ross was 11th.

Fairland teammate Tanner Mattie ran well in the 3200 as he finished 10th with a personal-best 9:55.15 time.

Ironically, Mattie ran a 10:04.51 in the regional meet to place third behind Zak Geiger of New Concord John Glenn and Matt Bromley of Sheridan. Geiger was sixth at the state meet and Bromley 11th.

Samuel Prakel of Versailles won the event with a 9:16.14 time.