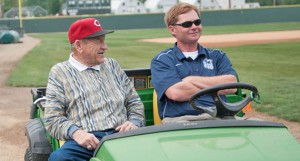 “This is a good partnership between the community and the university,” Dr. Rita Rice Morris, SSU President said.

“This tournament is a great fit with our programs and we are looking forward to being a part of its growth.”

Long-time Cincinnati Reds’ scout and tournament namesake Gene Bennett said that the tournament, now in its third year, has continued to grow with eight teams competing this year.

“We hope people will come out to see some incredible baseball,” he said. “These are young players – all under 18 – who show us how the game can be played. Some of these teams have won national championships and we’re grateful to have them all be a part of this event.”

“We have an outstanding lineup of teams for 2012,” SSU Baseball Coach Ted Tom said. “We are really excited to be hosting teams with such a great history, not only in amateur baseball but in professional baseball as well.

“Shawnee State baseball is looking forward to being the official host of the event and to bringing the center of the baseball universe to campus.”

Games begin at 11 a.m. Thursday, June 14, at Portsmouth, Valley, and West high schools and at noon at Branch Rickey Park. Official opening ceremonies will be held at 6 p.m. at Branch Rickey Park and will include a special recognition of state baseball champions Wheelersburg High School.

Little League teams, as well as the general public, are invited and all admission is free of charge.

The Glockner Family of Dealerships is awarding $500 to the little league organization with the most uniformed players in attendance at the opening ceremonies.

A complete schedule of games, along with tournament results, may be found online at gbbc.shawnee.edu.