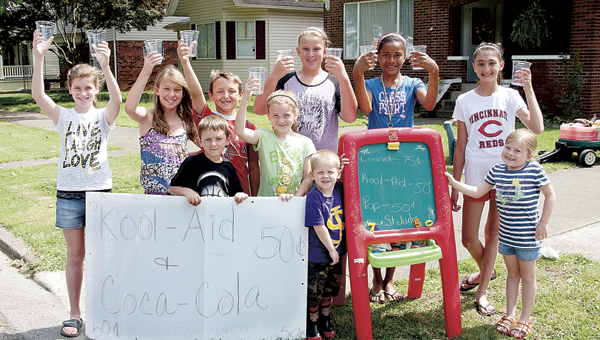 Children on the block between Fourth and Fifth streets along Heplar streets in Ironton are selling lemonade for charity.

The lemonade stand on the corner of Fifth and Heplar streets in Ironton was only in its fourth day Wednesday, but the Dubble Bubble money bucket was already overflowing with profits.

If you’ve driven by that corner, you’ve probably heard the enthusiastic cheers.

“Lemonade!” everyone shouted back.

A folding chalkboard lists the menu and children dance with signs promoting their products: Lemonade for 75 cents; Kool-Aid and pop for 50 cents.

The group of nine young entrepreneurs said the idea for the stand was just a way to earn some cash and have fun with friends.

“We just started to do it for fun,” 12-year-old Lexi Wise said. “We didn’t really need the money.”

Instead of splitting the money between the group, they all agreed to donate their profits to a worthy cause and, after much consideration, chose St. Jude Children’s Research Hospital.

“We realized we could end up with cancer someday,” said Jordyn Koerper, 11. “We wanted to help prevent it.”

As of Wednesday afternoon, Lexi’s clipboard showed the group had raised $150.88. They set a goal for $200, but now plan on spending the entire summer getting as much money as they can to donate to St. Jude’s.

As the children danced and cheered for passersby, Lindsey Mahlmeister sat on her front porch and watched. Mahlmeister lives on the corner and offered the group the use of her yard for better exposure to traffic and walkers.

“I’m amazed at how well it’s gone with so many kids,” Mahlmeister said, noting how mature the group has been. “…They are doing the math themselves and keeping track. It is a good thing they are doing and they are having fun doing it. Who’d put a stop to that?”

Mothers Julie Whaley and Kelli Hacker sat and watched from a short distance and said they were proud of their “little entrepreneurs.”

“I’m just really proud of them,” Hacker said. “… It makes us feel good as moms that they wanted to help others.”

Appeared in court Wednesday It’s been almost 10 years since nine people died and three others were injured in a... read more