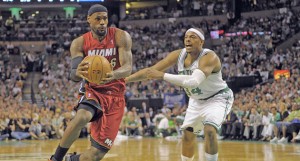 The Miami Heat's LeBron James, left, drives against the Boston Celtics' Paul Pierce during the first half in Game 6 of the NBA Eastern Conference Finals at TD Garden in Boston, Ma., on Thursday. (The Ironton Tribune / MCT Direct Photos)

The Eastern Conference finals, and his chase of an NBA championship, are headed back to Miami for a Game 7.

James had 45 points and 15 rebounds, overwhelming the Celtics and leading the Heat to a 98-79 victory Thursday night that forced the decisive game.

Pushing away elimination right along with every defender who tried to stop him, James shot 19 of 26 from the field and finished four points shy of his playoff career-high while playing 45 minutes, not sitting down until the victory was long secured.

“He was absolutely fearless tonight, and it was contagious,” Heat coach Erik Spoelstra said. “The way he approached the last 48 hours, and not only LeBron, but everybody else. Nobody likes getting dirt thrown on your face before you’re even dead. He showed great resolve.”

Dwyane Wade added 17 points for the Heat, who need a victory at home Saturday to return to the NBA finals.

Rajon Rondo had 21 points and 10 assists for Boston. Kevin Garnett and Brandon Bass each scored 12 points, but Paul Pierce had only nine on 4-of-18 shooting.

In the site of some of James’ biggest disappointments, the only disappointed ones Thursday were the thousands of fans who hoped to see a celebration but instead filed out of the TD Garden midway through the fourth quarter, just before the league MVP called it a night.

Miami barely won Game 2 before dropping the next three games, but this one was never in doubt. James was a one-man force on what’s supposed to be a Big Three, carrying the Heat in the first half while Wade made only 1 of 6 shots.

The Celtics were hoping to complete a comeback from a 2-0 deficit, as Oklahoma City did, and advance to face the Thunder in the NBA finals. But they missed 13 of 14 3-point attempts and will have to win a second straight game in Miami to play for the title.

James’ season was twice ended in Boston while playing for Cleveland, the Celtics emerging as the winner in a Pierce-James duel in Game 7 of the 2008 East semifinals, then beating the Cavs in Game 6 of the second round two years later.

That was James’ last game with Cleveland, leaving that summer for Miami and the All-Star help that Wade and Chris Bosh could provide.

He needed none of it Thursday.

He had 30 points by halftime and spent the night silencing the Celtics crowd and perhaps some of the doubters he somehow still has. He set the tone for the game by making 6 of 7 shots and scoring 14 points in the first quarter, and he made sure the Heat were never challenged from there.

“I hope now you guys can stop talking about LeBron and he doesn’t play in big games,” Celtics coach Doc Rivers said. “He was pretty good tonight. So we can put that to bed and go play Game 7.”

Meanwhile, Pierce, whose 3-pointer over James was the biggest basket of Boston’s Game 5 victory, missed 13 of 16 shots through three quarters, including all six 3-point attempts.

The Heat obviously weren’t deflated by that loss and came to fight, scoring 10 straight points to build a 10-point lead shortly after Mario Chalmers was called for a technical foul after getting mixed up with Ray Allen. They extended it to 12 points later in the period, taking a 26-16 lead into the second after shooting 58 percent in the period.

Wade finally got on the board with a jumper to open the second, but he seemed strangely passive even with Miami trying to save its season.

He had consecutive baskets for a 15-point lead and came up with a basket every time the Celtics tried to get any rhythm. He soared high above the rim — and any other player — for a follow dunk after the Celtics had crept within eight in the final 2 minutes of the half. Miami led 55-42 at the break.

James made 12 of his first 13 shots before missing from the perimeter on his final attempt of the half.

Only Rondo kept it from being a blowout, scoring 19 points and adding five assists in the half. Relishing the challenge, he even emulated Garnett by doing a couple of knuckle pushups after being knocked to the court while drawing a foul, but he couldn’t keep up with James and needed some help that never arrived.

The Celtics, trying desperately for one last championship before the expected breakup of their Big Three, hope this one doesn’t get added to recent series losses against Orlando in 2009 and the Lakers in the NBA finals in 2010, when they lost Game 6s with chances to win series and then fell in Game 7.

James’ first basket of the third quarter increased the lead to 17 points, and from there it was just a matter of coming up with another score any time the Celtics tried to make a run.

Boston never came close, and when a 3-pointer by Shane Battier made it 81-63 with 10:19 to play, Rivers spent part of a timeout standing alone on the court with his arms folded, leaving it to the players to try to come up with an answer that wasn’t there.

Bosh entered with 5 1/2 minutes left in the first quarter of his second game back after missing nine with a lower abdominal strain, finishing with seven points and six rebounds.

Notes: James is the first player to score at least 25 points against the Celtics in eight consecutive postseason games since Kareem Abdul-Jabbar from April 28, 1974, to May 27, 1984. …The NBA playoff record for points in a half is 39, set by Golden State’s Eric “Sleepy” Floyd on May 10, 1987, against the Lakers. … The Heat switched to their red road jerseys after losing in the black here earlier in the series.

CINCINNATI (AP) — Aroldis Chapman failed for the first time all season, unable to throw his ultimate fastball past a... read more