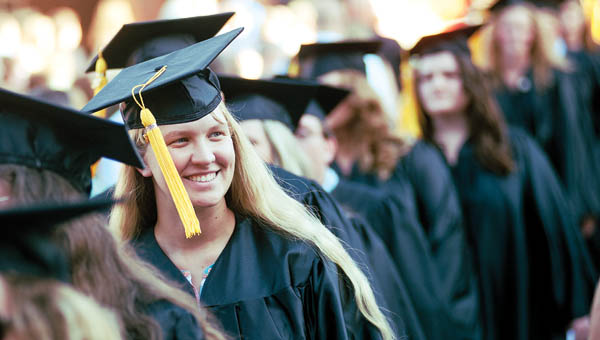 Students look out as friends and family members scramble for photographs at the start of the 2012 Ohio University Southern graduate recognition program and reception Friday.

Friday evening’s commencement ceremony at Ohio University Southern was not only a chance for parents to celebrate their children’s accomplishments, but also for some children to celebrate lifelong dreams finally realized by their own parents.

“I feel great,” Horton said of her mother’s accomplishment. “She’s 57 years old and she’s finally getting her degree.”

Johnson was one of 344 students to earn an associate’s or bachelor’s degree, or both. More than 400 degrees were earned.

Dr. Bill Willan, Dean of OUS, said the success rate of the school is a testament to the community, faculty, staff and family and friends who are involved with the campus.

During his closing remarks, Willan told graduates the learning experience was not over for them.

“The more you learn, the more there is to learn,” he said.

After the ceremony, Johnson, of Russell, Ky., said since deciding to begin college in 2008, attending OUS has changed her life.

“I feel like I finally got the rest of my life completed,” Johnson said.

Johnson graduated with an associate’s degree in human services technology, but said she isn’t stopping there. She will continue on to get a bachelor’s degree in social work.

Johnson’s oldest daughter, Katie Horton, 26, said her mother’s journey has been inspirational to her, and she was happy to be able to support her as her mother did for her when she was in college.

“I’m really proud of her,” Horton said. “She’s wanted to do this for awhile. It just goes to show there is no age limit on passion and success.”

Johnson said, even though her parents died before they could see her graduate, she felt them watching over her Friday evening. She said her father always told her of the importance of education.

“I think they are watching over me,” Johnson said. “That’s all my dad ever wanted.”