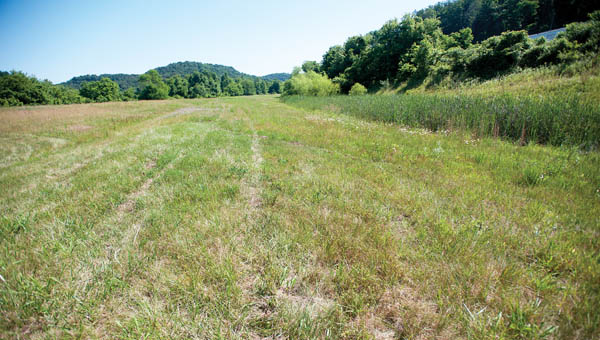 This field of green may someday turn into the long-awaited Chesapeake Bypass.

CHESAPEAKE — In the heart of the village of Chesapeake there’s a road that leads to nowhere, stopping at the edge of a field that in springtime blooms as green as a pasture in Irish countryside.

Sheltered by the Appalachian hills, those acres today owe their verdant color to Mother Nature. But, one day, that land may blossom into another kind of green: The kind that can be spent.

That’s because the dead-end road may flow someday into a high-traffic link connecting it with the rest of the eastern end of Lawrence County and even its West Virginia neighbors.

Then that land will be known as the Chesapeake Bypass. Millions will be paid to landowners in its path before it is turned into four lanes of white-striped asphalt.

But getting to that point will include lots of variables and a variety of scenarios. None will be as important as the one focusing on a two-word phrase that can mean largess or loss, depending on where the sentiment falls.

Those words are eminent domain.

What does it mean?

Simply defined, eminent domain allows the government to take the private property of any individual as long as the government can show that action is for the public’s good and is willing to pay for it.

“The Fifth Amendment to the United States Constitution provides that the government may only use the eminent domain power for a ‘public use,’ and then only if it pays ‘just compensation,’” says Charles Cohen a law professor at Capital University in Columbus. “So the property owner basically has two rights. First, he has the right not to have his land taken unless it is for a public use. And second, he has a right to ‘just compensation.’ He has a right to have both of these issues decided by a court.”

Land can be acquired through eminent domain no matter how the property owners feel about the particular project or how they feel about losing what is theirs. If the public’s long-term good can be served, the land can be taken, as long as the concept of ‘just compensation’ is met.

“As long as the government officials involved think the project serves a public purpose and they are rational in thinking that, a court is unlikely to stop them,” Cohen said. “Courts almost never second-guess government officials’ decisions about whether a project really serves a public purpose or whether it is necessary or a good idea or whether to use eminent domain to accomplish the project. Judges feel that such decisions should be made by project planners and legislators, not judges.”

If the public disagrees, there is always next year’s election because anytime a property owner takes his fight against eminent domain to the courts, he will most likely lose, Cohen says.

What is ‘just compensation’?

“Modern Supreme Court decisions have held that anything government officials rationally think could provide a public benefit or advantage constitutes a public use,” the law professor says.

However, eminent domain is not supposed to be as heavy-handed as it may seem. The property owner must get just compensation for losing his land and the Supreme Court has ruled that means the fair market value or what a buyer acting voluntarily would pay to a seller also acting voluntarily. And that value, Cohen says, must also include what would be the property’s most valuable realistic use.

Yet how the value an owner puts on his land can often exceed the money offered for it, especially if the land has been in a family for generations or is the only home he has known.

Unfortunately, those subjective factors don’t weigh in when it comes to compensation.

“Many property owners … feel that the property is worth more to them than fair market value,” Cohen said. “After all, if the home were only worth fair market value to them, they would have already sold it on the open market.”

What is the process?

The process of eminent domain starts when appraisers for those wanting the land determine what they believe is just compensation. Then that price is offered to the landowner.

However, that’s not the end of it. If the landowner thinks the prices unfair or not just, he still has rights. That’s where lawyers like Columbus attorneys Michael Braunstein and William Goldman come in. They are currently reaching out to the property owners on the footprint of the Chesapeake Bypass to inform them about the eminent domain process.

If the offer is rejected, that money is deposited in an account, then the government entity wanting land will start the process of eminent domain.

“We withdraw that money and turn it over to the client,” Goldman said. “It is just the way the law is set up.”

Then the attorneys’ bring in their own appraisers to come up with what they say is fair compensation.

“We level the playing field,” Goldman said. “It is a very emotional situation and land agents we feel take advantage of that emotion People don’t think they have an alternative. To end the misery they take the offer. (They think) if they don’t accept this offer, the project will be redesigned and probably the property isn’t going to be taken. That isn’t true.”

In Goldman’s experience 70 percent of these lawsuits are settled out of court. If that is the case, the attorney’s cut is 25 percent of the amount above the original offer.

When the case goes to trial, the law firm gets one-third of the amount above the original offer.

“Juries will come up with a figure that is between what the state is offering and what our best evidence is,” Goldman said. “Eminent domain is a very emotional situation. Jurors tend to identify with the pain that is involved when someone’s property is being taken.”

Looking at the bypass

Right now the $94 million bypass project is still undergoing design work; already it has been scaled back from its original $150-to-$180 million price tag.

“They have made a lot of changes,” said Kathleen Fuller, Ohio Department of Transportation District 9, spokesperson. “It is still in the same footprint. We are not going another route, though our redesign is looking at different ways to save money. Our design plans are 50 percent done.”

Although ODOT is not taking property through eminent domain, it is buying up land.

“We are in early acquisition,” Fuller said. “We have money that is earmarked for real estate. It will have an expiration date by the federal government. The money, we will lose it, if we don’t use it.”

ODOT is approaching property owners and making an offer, much the way it did when it acquired acreage for Phase I of the bypass built in Proctorville in 2006.

Then ODOT acquired 133 parcels with only 19 through eminent domain. Total purchase price for real estate was $28,610,000.

The Lawrence County Commissioners have filed a suit against two local holding companies wanting the land to meet what it says are requirements for safety at the Chesapeake airpark.

Opposing the county is Richard Wilson, a representative of the holding companies and a member of the family that gave the county the land for the airpark. He views eminent domain as an action that should be limited in its scope.

“Not something we should give and take lightly,” Wilson said. “Many times these powerful commercial and political interests want to use eminent domain for personal enrichment instead of to benefit the public in total. The right of eminent domain is pretty well-written in Ohio statutes and I think it should be taken literally and not twisted around to try to benefit overreaching on the part of the government.”

Community leaders gathered Friday morning at the site of the new Fruth Pharmacy to welcome the start of what is... read more