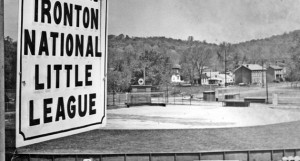 The Ironton Little League opened in 1963 with just one field for both the little league and senior league teams. The league will have a community celebration of its 50th season on Saturday. (The Ironton Tribune / File Photo)

It was 1963. The average income was $5,800, a loaf of bread was 22 cents, AT&T introduced the touch tone phone, the Beatles had just had just hit the American rock ‘n roll scene, and the Los Angeles Dodgers beat the New York Yankees in four straight to win the World Series.

The Ironton Little League will have another celebration on Saturday, this time to commemorate their 50th season.

Hot dogs — courtesy of Steve Bartram of Bartram & Son Grocery — will be sold for 25 cents when activities begin at 5 p.m.

A series of skills competition will be held at 6 p.m. with the introduction of the league’s four state championship teams to start at approximately 8 p.m.

Mahlmeister said the public is invited and there is no charge.

“I hope everyone comes out for some fun. Little league is a community thing and this is our way of saying thanks for all your support throughout its history,” said Mahlmesiter.

The league began with one field — the current senior league field — and little league games were played on the field as well.

The little league used a plywood-sectioned fence that was placed on a chalk line in the outfield. The fence sections had handles and players would carry the fence to the outfield and place it on the chalk line prior to games.

The league has since expanded to include all levels of play including tee ball, minor league, junior league and girls’ little league and senior league softball.

Mahlmeister is hoping as many former players, coaches and managers will be part of the activities. Anyone with information or questions should contact him at (740) 646-4436 or email jimmy_mahl@yahoo.com

CINCINNATI (AP) — Johnny Cueto felt good. He knew that many of his teammates — including Joey Votto — couldn’t... read more