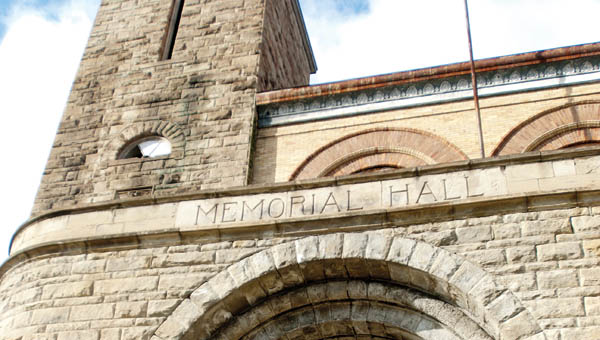 Memorial Hall is the focus of studies to turn it into a countywide emergency operations center.

Turning Memorial Hall into an Emergency Operations Center could cost the county between $33,000 to $20,000 a month for the next 20 years, if the county commissioners adopt one of five options presented to them.

Commissioners Bill Pratt and Freddie Hayes met at the Tuesday work session with Ralph Kline of the Ironton-Lawrence County CAO, architect Shawn Walker and representatives from the county’s emergency services.

Three weeks ago Kline was charged with coming up with financing scenarios to turn the aging 19th Century structure, owned by the city of Ironton, into a viable heart for emergency operations.

The county has been eyeing the property to turn it into a headquarters for EMS, EMA, 911 dispatching and the county coroner. Right now those operations are separated in buildings that no longer meet their needs.

In May Carl Howard of Mi-De-Con Inc., a commercial construction firm, said the building could be restored for a cost of $3.7 million.

That compares with an opinion given earlier from Shawn Walker, an Ashland, Ky.-based architect, who estimated restoration could cost approximately $3 million. However, a study done in 2007 by E.L. Robinson Engineering stated the cost for restoration would hit $7 million, while tearing it down would cost about a half-million dollars.

All proposals are for a 20-year period and after that the county would assume ownership of the building.

Pratt told the group he favored two of the proposals. Under Option 2 the county would issue bonds to borrow $3,753,000 offsetting the monthly funding cost by leasing out a portion of the building. With tenants that monthly payment would be $29,167.

Monthly cost also includes utilities, insurance, janitorial services and payment to a fund to cover replacement costs of such items as the roof.

After relocating the emergency agencies to Memorial Hall, there would be 3,500 square feet available to lease out, which Kline said a going annual rate would be $15 a square foot. That would mean until tenants were found it would cost the county an additional $4,375 a month.

Option 3 would depend on the county receiving a $2.5 million homeland security grant. Then the county would only borrow $1.85 million with $20,417 as the monthly payment. This option would also include tenants. The county won’t learn if it has won the grant until June 29.

Pratt was referring to what he said would be the cost to demolish Memorial Hall.

After the meeting, the commissioner said he would like the free water provided for the 20-year payback period and would approach Ironton City Council on Thursday about the request.

“I would have to talk with Commissioner Pratt,” Ironton Mayor Rich Blankenship said when contacted about the request. “I have not talked with him regarding that. There is no way to determine what the cost would be in there. (It would depend on) how many people would there be.”

The most expensive proposal would be with the county issuing bonds of $3,753,000 but not renting out space. That would be a monthly cost of $33,542.

“It would be one year to make sure we could get the tax credits,” Kline said. “It is competitive. I really caution this is a small project. A lot don’t want anything under $10 million.”

The commissioners will meet again on the Memorial Hall project at 9:30 a.m. Tuesday, July 3. At that time County Auditor Jason Stephens is expected to present data on the current utility costs of the emergency departments at their current locations.

“I wanted the auditor’s office to examine the utility expense for the EMA, 911 and so forth to see what their utilities are now, to see if it matches what Ralph (Kline) has for the utility expenses (in the proposals,)” Pratt said. “Hopefully by July 3, we will know about the grant if we got approved for that.”

City to vote on AFSCME contract

City leaders and members of the American Federation of State, County and Municipal Employees (AFSCME) Local 771 have reached a... read more