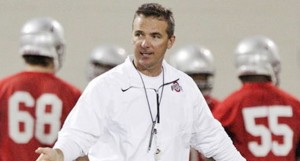 Ohio State head football coach was in rival territory as he was one of several coaches speaking at a camp in Detroit. Also attending and speaking was Michigan head coach Brady Hoke. (The Ironton Tribune / MCT Direct)

The new Ohio State coach was at a Michigan high school Wednesday, one of several coaches on hand at a football camp just outside of Detroit. Meyer gave a brief speech to the campers, who came from all over the country to attend the Sound Mind, Sound Body Academy at Southfield High School.

For the most part, the mood among the coaches was casual, with Meyer and Hoke even having some ribs together following the news conference.

None of the 25 players Ohio State introduced on signing day this year came from Michigan. Meyer was asked about Ohio State’s ability to land good recruits from Michigan.

The camp, sponsored by Adidas, is in its eighth year, and college coaches are allowed to participate. Meyer said the arrangement took him by surprise when he first learned of it.

“This is so unusual. I can’t believe we’re allowed to do this,” Meyer said. “When I first heard of this … I started laughing. I said, ‘You can’t do that.’ And then our compliance said, ‘You sure can.”’

The coaches were supportive of the camp’s mission, and this was a chance for them to interact with campers away from a college campus.

“For us, obviously, at the University of Michigan, this is an important part of development that we want to help within the community,” Hoke said. “It’s us trying to help kids.”

Meyer says he’s concerned about the difficulty some prospects have in traveling to schools and hopes the process can become easier in the future.

CINCINNATI (AP) — The Cleveland Indians gave up on Brandon Phillips at the start of the 2006 season. He’s been... read more