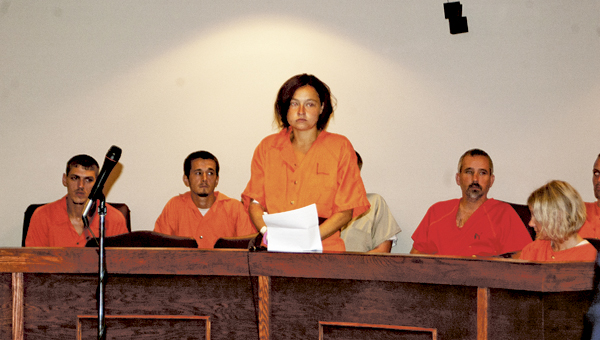 The case of an expectant mother accused of murder will go to a Lawrence County Grand Jury.

She is accused of shooting Delmar Jenkins, 53, of 279 Township Road 323, Ironton, early Sunday morning at his home. He was found by a family member and taken by helicopter to St. Mary’s Medical Center in Huntington, W.Va., where he was placed on life support. He died the next day. Seagraves was arrested several hours after the shooting.

During a municipal court preliminary hearing, Lawrence County Sheriff’s Office Detective Aaron Bollinger testified that Seagraves was at Jenkins’ Elizabeth Township home late Saturday night and the two were taking drugs. At some point, Seagraves and Jenkins were lying on his bed and she drifted off.

“She told me she was disgusted with her life and tired of being a drug addict,” Bollinger testified. The detective said Seagraves recounted to him that she had first found a knife and was going to kill herself and had taken it to Jenkins’ bedroom.

Bollinger said Seagraves told him she then found a gun owned by the victim and had first put it in her mouth to kill herself but then decided to kill Jenkins and turn the gun on herself afterward.

“But there was only one round in it,” Bollinger testified.

Bollinger said an autopsy conducted this week in Franklin County showed the single .22 shell had entered Jenkins’ right temple and exited above his left eye. Bollinger said Seagraves told him Jenkins had been asleep when she shot him.

Bollinger also said Seagraves’ account of the bedroom, blood splatter, injuries to Jenkins’ body and the rifle allegedly used were all consistent with the investigation into the crime.

Bollinger testified that, at first, Seagraves denied even knowing about Jenkins’ murder but later confessed to the crime.

But during cross examination, attorney Warren Morford, who represents Seagraves, asked Bollinger if he had performed a gunshot residue test on Seagraves’ hands.

Bollinger said he had not.

“Too much time had passed,” Bollinger said. He explained that residue tests are not accurate after two hours. Between the time Jenkins was shot and when Seagraves was interviewed, more than 8 hours had passed.

“Did you ask if she was under the influence of any drugs?” Morford asked.

He reminded Bollinger that Seagraves had been taking drugs with Jenkins the previous night. Bollinger said Seagraves was able to give her full name and other pertinent information and seemed to understand what was being asked of her.

“Mr. Jenkins is known to you, isn’t he?” Morford asked Bollinger. “He’s a convicted criminal too, isn’t he?”

Morford asked if another person reportedly in the Jenkins’ house at the time of the shooting was ever considered a suspect.

Bollinger said Eddie McClellan, a family member, was sleeping on the other end of the mobile home and had taken more sleeping pills than usual; he did not hear the shooting. McClellan did find Jenkins, still alive but badly injured, in his bedroom, hours later.

Morford asked if any other person was or had ever been considered a suspect in the case. Bollinger said no, Seagraves had confessed and everything she has told police and the evidence at the crime scene supports that confession.

Seagraves remains in the Lawrence County Jail under a $250,000 bond.