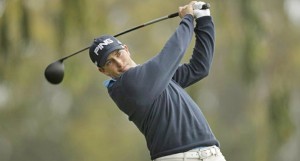 Michael Thompson shot a 4-under par 66 to take a three-shot lead after the first round of the U.S. Open Golf Championship on Thursday. (The Ironton Tribune / MCT Direct Photos)

SAN FRANCISCO (AP) — Any comfort Michael Thompson took looking up at the leaderboard at The Olympic Club and finally seeing his name at the top fizzled fast when he saw the player one spot below.

Thompson shot a 4-under 66 in the first round of the U.S. Open on Thursday, taking a three-shot lead in the clubhouse over the hard-charging Woods and David Toms.

The 2007 U.S. Amateur runner-up at Olympic Club sure played as though he knew the course, finishing with seven birdies to go with three bogeys in an aggressive and fearless round. The 27-year-old former Alabama standout still couldn’t feel satisfied with 48 holes remaining and a familiar face lurking behind in another major.

“Give Tiger the spotlight,” Thompson said. “I don’t care. I’m going to go out and play my game. If I go out and putt the way I did today, I’ll be in contention.”

What a way for this championship to begin.

Woods birdied consecutive holes late in his round and played the undulating Lake Course with the kind of confidence that has made him a 14-time major champion. He bogeyed his second-to-last hole and finished with a 1-under 69 to blow away playing partners Phil Mickelson (76) and Bubba Watson (78).

That’s a stirring start for one of the world’s most watched — and scrutinized — athletes of any generation considering who he played at the last major. Woods never broke par in four rotten rounds at the Masters in April.

“I felt very pleased with every facet of my game today and I stayed very patient out there,” Woods said. “I was very pleased how I executed my game plan.”

That could be a scary for the rest of the field.

The morning fog that blanketed the tight, twisting grounds lifted by the time the group of Woods, Mickelson and Watson made the turn. Not that Woods needed faster and firmer conditions under the sun against longtime nemesis Mickelson and reigning Masters champion Watson.

All the roars belonged to Woods.

Twirling his clubs instead of kicking them, Woods was in complete control of his game, finding fairways, sticking greens and avoiding the thick rough and towering trees that line the course built on the side of a hill across the street from the Pacific Ocean. He opened with five straight pars until his approach on the par-4 14th bounced off the tiny green and into the thick rough, forcing him to settle for bogey.

That was one of the few mistakes he made.

With the marine layer hovering above the grounds and San Francisco’s steep hills in the backdrop until mid-morning, Woods surgically worked his way through the course. He holed a 45-foot birdie putt on the par-4 fifth, giving a small fist pump and bringing the gallery roaring to its feet the way only he can.

“I know I can hit the ball this way and I know I have been hitting the golf ball this way,” Woods said. “And I was able to put it together in a major championship. I’m going to need it the next three days. This golf course is only going to get faster.”

Thompson was anything but conservative on this course.

After all, he knows it well.

Thompson lost 2 and 1 to Colt Knost in a grueling 36-hole finale at the U.S. Amateur at Olympic five years ago, and hadn’t played a meaningful round on the Lake Course until after he qualified for the U.S. Open last week.

Thompson had three bogeys on his front eight — the USGA sent players off holes Nos. 1 and 9 instead of the usual 1 and 10 during the first two rounds because of the close proximity to the clubhouse — and looked lost for long stretches. Instead, he found his groove with a powerful punch at the end.

Thompson had four birdies in his final eight holes, including a putt on 18th that brought the fans from the grandstand to those sitting up the steep hill below the clubhouse to their feet. He gently tossed the ball into the gallery and waved to the crowd.

If not for a few misses, Woods might be the one on top already.

Woods missed birdie putts on the first and second holes on the — yanking the latter off the lip from about 4 feet — and followed with another par. He stuck his approach within 8 feet on the par-4 fourth and sunk another birdie putt to bring some of those roars back to Olympic for the first time since the club last hosted the event in 1998.

The round was the first time Woods and Mickelson were paired in the U.S. Open since Torrey Pines in 2008. That’s when the U.S. Golf Association grouped players off the world ranking, and also the last time Woods won a major.

While Woods never lost his composure, his playing partners never found it.

Mickelson and Watson turned thousands of spectators in the gallery into moving targets. On the 14th, Mickelson apologized to the fans in the gallery when he retrieved his ball. The fan said he wasn’t hit — Mickelson jokingly told him to walk ahead before his next shot.

Lefty also hooked his first tee shot way right and the towering cypress trees gobbled it. After a five-minute search for the ball, Mickelson had to tee off again for one of three straight bogeys.

“It’s sometimes a tendency that I’ll have in a U.S. Open,” said Mickelson, who has been a runner-up a record five times in this championship. “I’ll make tentative swings because of what could happen as opposed to making aggressive, confident swings.”

McIlroy shattered U.S. Open records last year at rain-softened Congressional when he reached double figures under par before he even turned in his second-round scorecard. He finished at 268 to break the 72-hole record by four shots, and his 16-under total was four better than Woods’ mark at Pebble Beach in 2000.

Through seven holes, McIlroy and Westwood were 3 over, and Donald was 4 over.

“This is not like it was last year,”’ Woods said. “This is a tough one. This is tough to make birdies.”

Some qualifiers who made waves all week didn’t do so when the tournament started.

The 14-year-old Andy Zhang, believed to be the youngest qualifier in championship history, shot a 9-over 79. Casey Martin, who has a painful circulatory disorder in his right leg and won a Supreme Court ruling that allowed him to ride a cart at Olympic Club in 1998, was 4 over on the front nine.

By JOE KAY AP Sports Writer   CINCINNATI — This Cleveland-versus-Cincinnati series will be remembered for an inside fastball and... read more