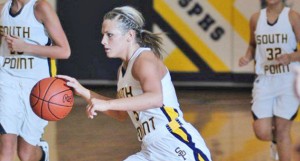 “They called me on Monday and saw my highlight tape and wanted me to come as soon as possible,” said Mitchell who made the five-hour trip on Thursday.

“I went down there and I didn’t think they were going to offer. I went in not knowing what was going on. They showed me campus and she gave me an offer.”

The regular season game videos were enhanced by her video highlights from the Ohio-Kentucky All-Star Game where she won the one-on-one contest and played well in the game.

Although she talked with Northern Kentucky, Rio Grande and Cumberland, Mitchell preferred the challenge at the Division I level and the Horizon League.

“I really wanted to play somewhere. It’s been a long road. I didn’t know if I was going to get the chance to. Now I’m glad I’m going and I’m happy about that,” said Mitchell.

“She is relentless. That’s the word I use to describe her. She just keeps coming at you even if she is overmatched she keeps coming at you. She scored 1,000 points on the heels of two 1,000-point scorers and that’s hard to do,” said Adams.

“I think her style helped her a lot. She’s very aggressive going to the basket.”

Mitchell scored her 1,000th career point this past season during a career that not only saw her start all four seasons but play with 1,000-point scorers Kayla Fletcher and Jalynn Bradburn the past three years.

“It helps being on a team with them for three years,” said Mitchell. “Between Kayla, Jalynn, Ericka (Leighty) and Tinesha (Taylor), they made me a better player.”

The 5-foot-9 forward capped her career by being named special mention All-Ohio by the Associated Press in Division II.

Mitchell averaged 20 points and 8.5 rebounds as she led the Lady Pointers to a 16-6 record and a fourth sectional title in as many seasons.

Mitchell was a first team All-Southeast District selection and first team on the Coaches’ District 13 team. She was the district’s representative to the annual North/South All-Star Game.

Although she played inside most of the time in high school, she will probably move to the small position in college.

“(Abiad) told me to use my left hand more and get more consistent on the 3-pointer, so I plan on working on that,” said Mitchell.

“Obviously, I want to play as much as I can, but I’m just happy to be on the team. It’s been kind of crazy. I’m still in shock.”

NEW YORK (AP) — Homer Bailey was at his best with runners on all around him. Bailey pitched out of... read more