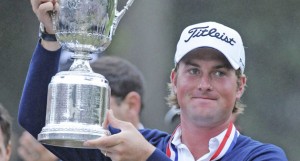 Overlooked for so much of the week, Simpson emerged on a fog-filled Sunday at The Olympic Club with four birdies around the turn and a tough chip out of a hole to the right of the 18th green that he converted into par for a 2-under 68.

He finished at 1-over 281, and it was enough to outlast former U.S. Open champions Jim Furyk and Graeme McDowell.

Furyk bogeyed two of his last three holes. McDowell had a 25-foot birdie on the 18th to force a playoff, but it never had a chance.

Olympic is known as the “graveyard of champions” because proven major winners who were poised to win the U.S. Open have always lost to the underdog. One of those was Arnold Palmer in 1966, when he lost a seven-shot lead on the back nine.

Perhaps it was only fitting that the 25-year-old Simpson went to Wake Forest on an Arnold Palmer scholarship.

“Arnold has been so good to me,” Simpson said. “Just the other day, I read that story and thought about it. He’s meant so much to me and Wake Forest. Hopefully, I can get a little back for him and make him smile.”

No one was beaming like Simpson, who followed a breakthrough year on the PGA Tour with his first major.

No one was more disgusted than Furyk, in control for so much of the final round until he snap-hooked his tee shot on the par-5 16th hole to fall out of the lead for the first time all day, and was unable to get it back. Needing a birdie on the final hole, he hit into the bunker. He crouched and clamped his teeth onto the shaft of his wedge. Furyk made bogey on the final hole and closed with a 74, a final round without a single birdie.

McDowell, who made four bogeys on the front nine, at least gave himself a chance with a 20-foot birdie putt on the 17th and a shot into the 18th that had him sprinting up the hill to see what kind of chance he had. The putt stayed left of the hole the entire way, and he had to settle for a 73.

McDowell shared second place with Michael Thompson, who closed with a 67 and waited two hours to see if it would be good enough.

Tiger Woods, starting five shots behind, played the first six holes in 6-over par and was never a factor. He shot 73 and finished six strokes back.

Furyk was fuming, mostly at himself, for blowing a chance at his second U.S. Open title. He also was surprised that the USGA moved the tee up 100 yards on the 16th hole to play 569 yards. It was reachable in two shots for some players, though the shape of the hole featured a sharp turn to the left.

“There’s no way when we play our practice rounds you’re going to hit a shot from a tee 100 yards up unless someone tells you,” Furyk said. “But the rest of the field had that same shot to hit today, and I’m pretty sure no one hit as (bad) a shot as I did. I have no one to blame but myself.

“I was tied for the lead, sitting on the 16th tee,” he said. “I’ve got wedges in my hand, or reachable par 5s, on the way in and one birdie wins the golf tournament. I’m definitely frustrated.”

But he gave Simpson his due.

Of the last 18 players to tee off in the final round, Simpson was the only one to break par. That didn’t seem likely when Simpson was six shots behind as he headed to the sixth hole, the toughest at Olympic. That’s where he started his big run.

His 7-iron landed in the rough and rolled 5 feet away for birdie. He made birdie on the next two holes, including a 15-footer on the par-3 eighth. And his wedge into the 10th settled 3 feet away, putting him in the mix for the rest of the day.

“It was a cool day,” Simpson said. “I had a peace all day. I knew it was a tough golf course. I probably prayed more the last three holes than I ever did in my life.”

Simpson’s shot from the rough on the 18th hole went just right of the green and disappeared into a hole, a circle of dirt about the size of a sprinkler cap. With a clump of grass behind the ball, he had a bold stroke for such a nervy shot and it came out perfectly, rolling 3 feet by the hole for his much-needed par.

Then, it was time to wait.

It was the third time in the last seven years that no one broke par in the U.S. Open. On all three occasions, the winner was in the locker room when it the tournament ended.

While Furyk will be haunted by his finish, McDowell can look back at his start — four bogeys on the front nine — and his inability to find fairways. Even on the last hole, his tee shot tumbled into the first cut of rough and kept him from being able to spin the ball closer.

“There’s a mixture of emotions inside me right now — disappointment, deflation, pride,” he said. “But mostly just frustration, just because I hit three fairways today. That’s the U.S. Open. You’re not supposed to do that. You’re supposed to hit it in some fairways. And that was the key today for me.”

Beau Hossler, the 17-year-old who started only four shots behind, disappeared quickly and closed with a 76. He showed up at Olympic hopeful only of making the cut, then being low amateur, then perhaps winning. He had to settle for the first one. A double bogey on the last hole meant Jordan Spieth (70) was low amateur.

Woods has never won a major when trailing going into the last round, and he kept that streak going.

Starting with a tee shot buried in the rough just off the first fairway, he bogeyed the opening two holes and chopped up the par-3 third hole for a double bogey. His name was removed from the board before the leaders even stepped onto the first tee. He played that infamous six-hole start in 6 over. And that 69-70 start that gave him a share of the lead going into the weekend felt like a distant memory.

“I was just a touch off,” Woods said of his 75-73 weekend. “But I was still in the ball game. Today I just got off to a horrific start, and just never got it going early. And unfortunately, I put myself out of it.”

For Westwood, the sting was sharper — and quicker. His tee shot on the fifth hole struck a towering cypress tree and never came down. Westwood gazed at the top of the 40-foot tree, even using binoculars to try to find it. But it was back to the tee for his third shot, a double bogey that made him part of Olympic lore on the fifth hole, only with a far different outcome.

It was the same hole — but not the same tree — where Lee Janzen’s ball dropped from the branches as his back was turned while walking back to the tree. Janzen converted that break into another U.S. Open title in 1998. Westwood never threatened again in trying to win his first major.

Furyk and McDowell were slugging it out over the opening six holes, and no one seriously challenged them for the first few hours of the final round.

It changed quickly, and it was tight the rest of the way with as many as eight players believing they could win this championship.

Thompson, whose 66 in the opening round was the best score of the week, played bogey-free on the back nine and picked up a birdie on the par-5 16th with a wedge that settled near the flag. Despite missing an easy birdie chance on the 17th, he was in the clubhouse at 2-over 282.

Els drove the par-4 seventh green and holed an 8-foot eagle putt that brought him within two shots of the lead. He lost hope, however, when he slightly pulled his wedge into the 16th. It went into a collection area, and his putt up the slope came back at his feet. He had to scramble for a bogey.

“I’ll go to bed tonight thinking of the 16th, the third shot,” he said. “That basically cost me the tournament.”

Padraig Harrington came out of nowhere with five birdies in 11 holes to reach 2 over, but from the 18th fairway, he buried his approach in a bunker and made bogey.

Even so, this was a major that looked as if it would belong to McDowell or Furyk. One of them lost it early, the other one lost it late.

Simpson joined them as a U.S. Open champion, a win that moved him to No. 5 in the world.

NEW YORK (AP) — Brandon Phillips loves to fool around in the field during batting practice, trying all sorts of... read more