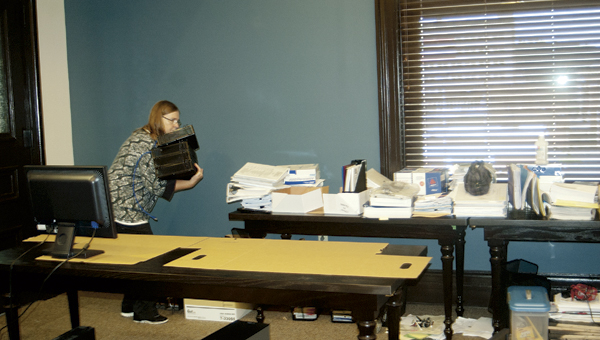 Jenny Halleck of the auditor’s office moves files to the conference room after water floods part of the suite of offices.

Laura McComas knew it was going to be one of those Mondays just after she got to work and unlocked the front door to her office at the courthouse.

Water from the floor above was thudding into the second floor suite of offices of County Auditor Jason Stephens.

Soon paper signs went up on the glass doors that the auditor’s office was closed to the public.

The culprit was a hot water heater under the sink at the Lawrence County Board of Education offices sending water onto the board office’s kitchen floor and through the ceiling tiles into one of the auditor’s offices. Apparently the heater burst during the weekend with no one finding the damage until offices opened in the morning.

“Fortunately we’ve gotten practice in packing up,” Stephens said midmorning Monday as his employees were moving the last files into the conference room.

The room that was hit housed the office’s accounts payable with damage contained to ceiling tiles, dry wall and between 80 to 100 checks that were to have gone out in the mail that day. Those checks will have to be reprinted.

“It’s not a good Monday,” Stephens said. “But it could have been worse.”

By 10 a.m. crews from a local restoration company were pulling down the ceiling tiles and running dehumidifiers and industrial fans to dry out carpeting.

Four weeks ago, employees of the auditor’s office moved back into their space in the courthouse after a $378,573 remodeling project that was prompted by mold in the ceilings in the courthouse.

“There’s no major damage,” Stephens said. “It will be covered by insurance. If this had happened where the computers were before the remodeling, it would have been a disaster.”

The office was reopened Monday afternoon.

Crosses dot Ironton lawns; Will it catch on?